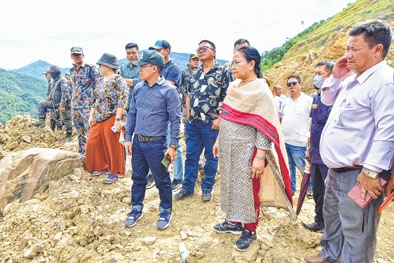 By Our Staff Reporter
Imphal, Jul 14: Shija Hospitals & Research Institute (SHRI) offered a four-and-a-half year old girl the gift of hearing with a cochlear implant on July 13 last.
SHRI has become the first private hospital in the region to perform cochlear implant surgery, said a statement issued by Takhellambam Premkumar, Deputy Manager, business development of the institute.
A team effort by dedicated ENT surgeons, audiologists, and other staff at Shija helped achieve this milestone.  A team of ENT surgeons comprising of Dr Moirangthem Niteshore Singh, Consultant ENT, Head & Neck Surgeon, Dr Taorem Medhapati Devi, Consultant ENT surgeon, Dr Yumnam Anupama Devi, Consultant ENT surgeon and Prof (Dr) RK Bedajit Singh, HOD Department of ENT performed the surgery.
Saying that the patient will receive auditory-verbal therapy (AVT) at SHRI for at least two years, it said that the four-and-a-half year old girl was born deaf in both ears.
Her hearing impairment was detected only when she was  one and a half years old.
The parents of the girl chose to have her treated with a cochlear implant, but, unfortunately, they were compelled to delay the surgery for three years due to financial limitations and the COVID-19 outbreak, it added.
Continuing that a cochlear implant bypasses the damaged part of the ear and stimulates the hearing nerve directly unlike hearing aids that amplify sound, the statement maintained that a sound processor is worn behind the ears to stimulate the auditory nerve, which subsequently sends the signals to the brain with cochlear implants.
The brain interprets the impulses as sounds and this enhances the clarity of sounds and improves the ability to understand speech. Cochlear implant surgery could be performed on adults as well as children, it said.
Dr Moirangthem Niteshore Singh, Consultant ENT, Head & Neck surgeon, stated that sound plays a major stimulus for the brain development of the child and due to hearing disability, if the auditory (hearing) nerves are not stimulated; it hinders the normal brain development of the child.
Early intervention is critical, as the development of the human brain matures by the age of five, the consultant said  and urged the parents and policymakers to implement Universal Neonatal Hearing Screening (UNHS), also often referred to as Early Hearing Detection and Intervention (EHDI) programmes in some countries to identify congenital hearing loss at an early age.
The consultant continued that every newborn must undergo a hearing test before being discharged from the hospital. He further highlighted the EHDI 1-3-6 guidelines, which states that a child should receive a hearing screening no later than 1 month of age; a diagnosis no later than 3 months of age; and entry into early intervention services no later than 6 months of age.
The patient’s father expressed his appreciation for the procedure and joy at seeing his child have the best chance to live a normal, productive life.