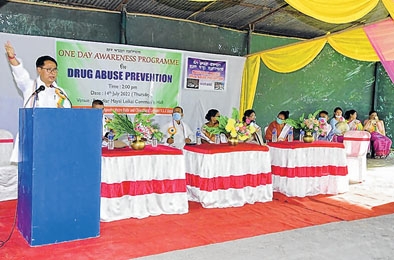 IMPHAL, Jul 14 (DIPR)
Health and IPR Minister Dr S Ranjan Singh has appealed to all to come forward to save the State from drugs.
The Minister made the above appeal while speaking as the chief guest at the one day awareness programme on 'Drug Abuse Prevention' jointly organized by Bamdiar Apunba Meira Paibi and Chingthang Lairembi V.L.F Bamdiar in Konthoujam Assembly Constituency today.
The Health Minister also maintained that the ill effects of drug abuse has caused a serious threat to human society. The Government under the abled leadership of Chief Minister N Biren Singh has launched the campaign of  'War on Drugs' with the objective to curb and control drug abuse and its menace. Awareness programs have been being organized at different levels in this regard, he added.
He said that the Government alone cannot solve the problem of drug abuse and stressed on the need of cooperation of the public, civil societies, NGOs, parents and other related stakeholders to tackle the problem.
He continued, 'Our society will sink one day if we do not solve this issue at the earliest.' Regarding the speedy increase of COVID-19 cases in the State, the Minister informed that the Government has surveyed most of the health facilities and adequate preparations are being done.
The Health Minister also appealed to all to take precautionary measures by maintaining SOPs prescribed by the Government.