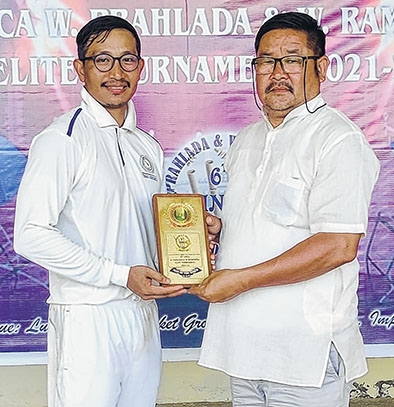 By Our Staff Reporter
IMPHAL, Jul 16 : Priyojit Kangabam blasted off an unbeaten 156 off 107 balls and snared two wickets to lead TRAU to a convincing 137 run victory against lacklustre FORCE in a Group A league match of the ongoing 6th MNCA W Prahlada and W Ramananda Elite Tournament at Luwangpokpa Cricket Ground, Luwangsangbam today.
With the win, TRAU finished atop Group A as PTRC, Patsoi finished second with four wins in 5 matches. Both teams eventually qualified for the semi-finals.
TRAU won the toss and managed to pile up a total of plausible total of 270 runs for 7 in 40 overs and bowled out FORCE for a meagre total of 133 runs courtesy all round performance from Priyojit Kangabam who had also scored a century against PTRC in the earlier part of the tournament last month.
Even as Pukhrambam Prafullomani had a short stay at the crease, Priyojit Kangabam anchored well to set up a 69-run second wicket partnership with Rahul Rajkumar (17) who was removed by Tashib Alam for the second wicket in the 16th over.
Tashib Alam also removed Bishworjit Singh for 7 to reduce TRAU to 94 for 3 but it did not dampen the spirit of the Kwakeithel team as Priyojit and Behul Singh Moibungkhongbam (31) forged a 79 run partnership for before Behul was caught and bowled by Mohammad Islauddin for the fourth wicket as the scoreboard read 173 after 31.2 overs.
Despite seeing his partners tumbling around, Priyojit kept the scoreboard ticking smashing 10 fours and 11 sixes en route to his unbeaten 156 in 107 deliveries.
Md Islauddin (2/49 in 8 overs) and Tashib Alam (2/25 in 8 overs) emerged with best bowling figures of FORCE in this innings as Mk Tamim, Pravesh and Khusru Pravez clinched a wicket each.
Chasing for a big target, FORCE faltered badly and were reduced to 10 for 2 in 4 overs with Rohit Singha (4) trapped lbw by Puinachandra Anoubam and Saddam Ahamed Shah (1) removed by Borish Khomdram in the 4th over.
Mohammad Islauddin however held on to post a fighting 62 off 63 balls with the assistance of Arshad Ali (22) and Khushru Pravez added 26 late on, but their efforts were not enough to resist well co-ordinated bowling effort of TRAU bowlers and FORCE eventually succumbed at 133 runs in 30.2 overs.
Anand Naorem emerged the pick of the TRAU bowlers as he scalped thrice for 30 runs in 7 overs while Priyojit Kangabam who shone with a ton earlier and Amritakaran Yumnam bagged two wickets each while maintaining perfect economies.
Puinachandra, Borish Khomdram and Bijenkumar also managed a wicket each in this innings to help TRAU consolidate at top of the table.
Eventually, Priyojit of TRAU was adjudged man of the match.
FORCE, who have suffered four of four losses, will play REYS, Nagamapal in the last Group A league (relegation battle) match on July 18.