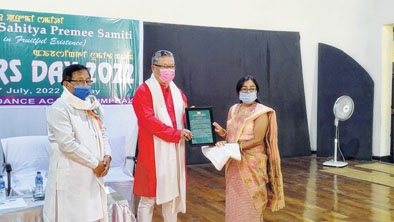 By Our Staff Reporter
IMPHAL, Jul 17: MLA of Langthabal Assembly Constituency, Karam Shyam has expressed that Manipur Culture Policy has been lying as a dormant policy since it has not been implemented properly.
He made the above statement at the Writers' Day 2022 observation held at Jawaharlal Nehru Manipur Dance Academy (JNMDA) today organised by Naharol Sahitya Premee Samiti.
As a part of the programme, the Writer of the Year 2022 was presented to Dr M Kriti Singh. His family received the award on his behalf since he is unwell.
The award carries a citation and a shawl.
Karam Shyam also appealed to all to encourage the writers in the State so as to have a developed and peaceful society and maintained that the writers in the State have played a major role in forming the base of a strong historical background.
He further expressed dismay that writers do not receive the due recognition and are not given their grants and aids by the authorities concerned and stressed on the need of drafting special policies to uplift the writers in the State.
The programme was also attended by L Upendra Sharma, president of Naharol Sahitya Premee Samiti as the presidium members among others.