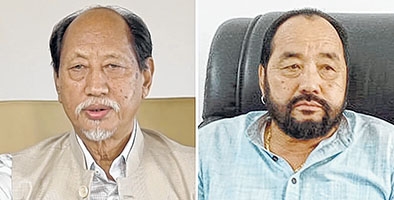 N Delhi/Kohima, Jul 16
The Nagaland Government headed by Chief Minister Neiphiu Rio on Saturday inched ahead making a concrete attempt to materialise or finalise a solution for final peace pact.
The State legislators also reiterated their stance to step aside and "pave the way" for an early solution.
The Parliamentary Committee headed by the Chief Minister and which also has Deputy Chief Minister Y Patton, BJP's floor leader, for the first time placed on record their appreciation for 'positive initiatives' taken by the umbrella organisation NNPGs.
"The Parliamentary Committee welcomes the positive initiatives being taken by the Government of India and the Working Committees of the NNPGs in regard to the on-going peace dialogue between the Govt of India and the Naga National Political Groups. The Committee also appreciates and welcomes the efforts made by the Naga political groups in taking the talks forward," a statement said at the end of the meeting in Kohima.
The panel threw the ball into the court of the Government of India specifically urging Prime Minister Narendra Modi and Home Minister Amit Shah to "invite" NSCN (IM) bring about a final solution that is "honourable, acceptable and inclusive".
It appealed to the negotiating parties (that is the Centre, NNPGs and NSCN-IM) to refer to the competencies as reflected in the Framework Agreement of 3rd August 2015 signed between the Government of India and the NSCN (IM).
"Since the talks have been concluded officially on 31st October 2019, the Hon'ble Prime Minister and the Hon'ble Union Home Minister are urged upon to invite the NSCN (IM) leaders for an early conclusion," the statement said.
It has been a rare occasion for the Rio-led dispensation to appreciate the role played by the NNPGs (umbrella organisation of seven militant groups led by N Kitovi Zhimomi) and also to acknowledge publicly that the formal talks were completed on October 31, 2019.
Generally, an impression prevails that powerful sections in the present Nagaland Government were biased towards NSCN (IM).
In fact, pressure would now mount on the NSCN (IM) to review its stance on Flag and a separate Constitution -- the twin demands rejected by the Centre outright.
Officials in Delhi earlier said that the demands of Flag and Constitution were added by the NSCN (IM) post October-2019 only as an 'afterthought exercise'.
The Parliamentary Committee, while welcoming the statements and observations made by various organisations and individuals calling for unity and early solution, appeals to all sections to refrain from making statements that may create misunderstanding and disunity, and that may stand in the way "of our common and collective endeavour to achieve genuine and lasting peace".
It said the State Government and the Parliamentary Committee are not party to the Naga political negotiations and that it is playing the role of facilitator, representing and "reflecting the voice of the people; and this role will continue to be pursued in a serious manner".
"We stand by the commitments of the constituent political parties as reflected in their respective manifestoes to pave way in the event of a political solution being arrived at," said the statement signed by CM Rio, Deputy CM Patton, former CM TR Zeliang and NPF leader K Azo Niunu.
The stand of the Parliamentary panel (comprising all 60 legislators) in effect reflects the power of people's pressure and wishes expressed by various influential organisations including various tribal student bodies, the Nagaland Tribal Council and the Federation of Gaon Burrahs (village elders).
Everyone in the last couple of months have maintained that the inordinate delay in peace talks were not acceptable.
At the individual level, veteran Naga leader SC Jamir, who enjoys good working rapport with Prime Minister Narendra Modi since his days as Governor of Gujarat, recently said that-"There is a marked change in the mood of the people of Nagaland. The ideological watchdogs have failed to note that there is anger against anti-social and anti-National elements". His reference was obviously to the NSCN (IM).
Speculation is rife because 'time' is running out via-a-vis peace parleys which began in 1997. Nagaland elections are due by Feb-March 2023 and the Centre has an obligation to deliver peace and solution as BJP's election slogan in 2018 was 'Election for Solution'.
The NNPGs led by its convener N Kitovi Zhimomi is keen for an early solution. This group has inked a preliminary Agreed Position pact with the Centre on November 17, 2017.
Recently, former Army chief and ex-CDS, Gen (Retd) MM Naravane also visited Nagaland and met important Naga leaders and social workers. Reportedly, he was told that 'delay' to arrive at a solution may not serve much purpose and apparently he also concurred with it.
Incidentally, his visit also came when the Centre is exploring possibilities of appointing an exclusive Governor for Nagaland.
A source said the army could enhance deployment of manpower in some parts of the State as well.
There are indications that after July 18 voting for the Presidential polls, the Centre may initiate some concrete steps next week or so to end the decades-old Naga insurgency.
On July 18, Nagaland is all set to make a record when perhaps for the first time all 60 legislators belonging to NDPP, NPF and BJP will vote in favour of NDA's Presidential candidate Draupadi Murmu.
In a recent article in local newspapers, SC Jamir also wrote - "A vast majority of the people are anxiously waiting for a new dawn but a small minority of the Nagas want to continue the status quo but people are now vehemently against it".
The potent NSCN (IM) has also lately come under criticism and especially some Naga intellectuals and ex-IAS officers have alleged that the Tangkhul leaders (tribe of NSCN-IM leader Thuingaleng Muivah) who reside mostly in Manipur want to dictate terms for Nagas in the present State of Nagaland. Many Naga leaders including from NTC and political party NPF have said that if the NSCN (IM) does not agree for an early solution, it could walkout from the negotiations that started way back in 1997. IANS