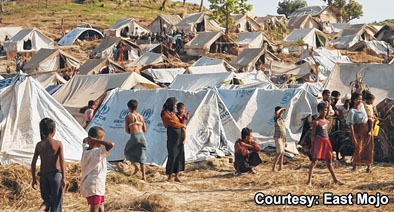 Aizawl, Jul 17
As many as 30,316 Myanmar Nationals, including 11,798 children and 10,047 women, have taken refuge in different parts of the State since the military seized power in the neighbouring country on first February last year, a senior officer in the Mizoram Home Department said on Sunday.
Fourteen lawmakers are also among those taking refuge in Mizoram according to data compiled by the State Home Department as of July 9, the official said.
Of the 30,316 people, profiling of 30,299 have been completed and 30,083 are being issued Identity Cards by the State Government, he said.
He said the identity card, which certifies the holder as sheltering in Mizoram, is only for identification purposes and is not valid for availing Government’s scheme. The ID card is valid only in Mizoram, he said.
The purpose of issuing identity cards is to identify the Myanmar Nationals for proper documentation to avoid awarding Indian citizenship by the vested interest for political benefit. It also aims at differentiating between the genuine residents and foreigners, he said.
Profiling of the Myanmar Nationals commenced in February and is a continuous process, and the task will be conducted whenever there are new entrants, he said.
A copy of the identity card or certificate accessed by this reporter states that the bearer is a Myanmar National currently residing in Mizoram.”This is for identification only and shall serve no other purpose, official or otherwise. This card is not transferable,” the ID card reads.
According to the official, a total of 156 makeshift relief camps have been set up by the Government, NGOs, village authorities and the Myanmar Nationals themselves in different parts of the State, with the Siaha district housing the highest relief camps at 41, followed by Lawngtlai district (36) and Champhai district (33).
He said that the State Government has so far sanctioned Rs 80 lakh as a relief.
The Myanmar Nationals were provided food and other reliefs by NGOs, student bodies, Churches and village authorities.
Many refugees have also supported themselves, he said.
He said that the number of Myanmar Nationals in the State frequently changes as some go back to their native village and others come in. “We can’t have proper monitoring of the in and out of the Myanmar Nationals as it happens frequently,” he said.
The official said that the State Government has not received any law and order problems from the Myanmar Nationals taking shelter in the State to date.
Six Mizoram districts–Champhai, Siaha, Lawngtlai, Serchhip, Hnahthial and Saitual- share a 510 km long international border with Myanmar’s Chin State.
Most of the Myanmar Nationals are from the Chin State and share ethnicity with the Mizos.
Majority of them live in relief camps, while others are accommodated by their local relatives and some others live in rented houses.
East Mojo