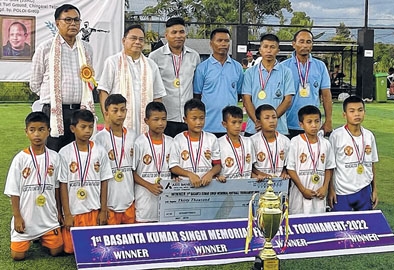 By Our Staff Reporter
IMPHAL, Jul 17 : Endeavour SS rode on Chetan double to seal a comeback 3-2 win over YOSC in a keenly contested title clash of the 1st Basanta Kumar Memorial 5-a-side (35 kg) Football Tournament today.
Punshiba hit a brace, with his goals coming up in the 11th and 15th minutes, but his efforts went in vain as Endeavour SS rallied back and overturned the lead in the second half before sealing the 3-2 win.
Chetan halved the deficit for Endeavour SS scoring his first in the 22nd minute before Wanglen drew level two minutes later and Chetan was at the target yet again in the 29th minute to turn things around.
Endeavour SS then held on to their lead till the final whistle to seal the title of the 16-team tournament organised by Poloi Group at Football turf, Chingarel Tejpur.