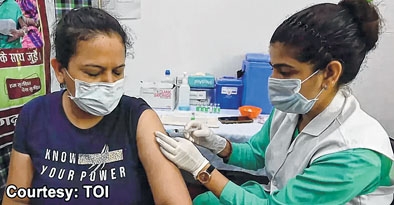 By Our Staff Reporter
IMPHAL, Jul 17 : Even as Manipur recorded a slight dip in the number of new Covid cases with 70, down from the 96 registered a day earlier, a 75 year old man with co-morbidities passed away after being infected by the virus.
This is the first death of a Covid positive person after March 17 this year. With the addition of one more, the death tally due to the virus has risen to 2121.
The deceased hailed from Imphal West and he was not vaccinated and had co-morbidities, said the COVID-19 Common Control Room quoting the COVID-19 Death Committee.
The 70 new cases included a Central security personnel and this is the second day on the trot that a defence personnel has tested positive. With one more, the number of Central security personnel infected by the virus has risen to 5016.
The number of active cases is 492 inclusive of the two Central security personnel.
Even as Manipur recorded one more death after three months, the number of people needing hospitalisation has also increased with 16 out of the 18 Covid beds at JNIMS being occupied with two beds vacant.
On July 16, the number of Covid beds occupied at  JNIMS was 15.
At RIMS too the number of Covid beds occupied is now 25 up from the 21 on July 16. The number of Covid beds lying unoccupied is 22.
The number of Covid positive people being admitted at other private hospitals and at the districts are yet to be accounted for.
The 70 new cases were detected at RIMS (3), JNIMS (3) and other testing centres (64).
The 69 new cases from amongst the civilians are from Imphal East (27), Imphal West (29), Thoubal (4), Kakching (2), Ukhrul (3), Churachandpur (3) and Kamjong (1).
Despite the rise in new cases and one more addition to the cumulative number of deaths, Manipur continues to lag in vaccination with only 53.53 percent of the eligible population having received the second dose. This is a marginal improvement from the 53.51 percent recorded on July 16.
The hill districts continue to pull down the overall vaccination rate with just 17.70 percent of the eligible population in Kangpokpi having received their second dose.
Kamjong (31.12 pc), Senapati (31.54 pc), Ukhrul (31.97 pc), Noney (34.83 pc) make up the bottom end of the vaccination chart.
On July 16, 3888 Covid doses were administered and this included 12,72,428 second dose and 1,35,253 precautionary dose.
The 70 new cases were detected while testing a total of 584 samples to peg the daily positivity rate at 12 percent.
With the addition of 70 more cases, the cumulative number of positive cases is now 1,32,927 including 5016 Central security personnel and the number of active cases is now 492 with 2 Central security personnel.  A total of 27 persons were discharged in the last 24 hours from home isolation (22), RIMS (2) and Shija Hospital (3). The recovery rate is now 98.11 percent.  On July 16, a total of 117 D Type oxygen cylinders and 14 B Type oxygen cylinders were made available to different health centres across the State.