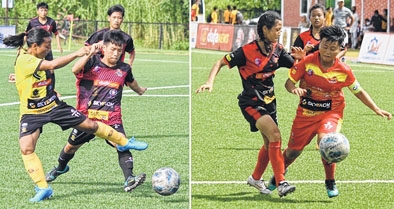 By Our Staff Reporter
IMPHAL, Jul 17 : Manipur Sangais cruised to fifth win and went clear at the top of the 1st North East Women's Football League with a 4-0 rout of Arunachal Pradesh Tigers today at SAI ground, Takyel.
Manipur Sangais who are high after the 7-0 thrashing of Tripura Pythons in the previous match for the fourth win kept their composure intact against Arunachal Pradesh Tigers who registered comfortable wins in the first three games of the 8-team tournament to secure the comfortable victory today.
Manipur Sangais were relentless from the beginning with the attacking third engaging themselves into finding the gaps and were 1-0 ahead after N Priyangka converted a fine chance.
Arunachal Pradesh whose winning streak ended with a 1-2 loss against Nagaland managed to soak up the pressure after conceding a goal but the gap widened when S Rinaroy made her way deep to double the advantage two minutes into the additional time of the first half.
Th Martina and N Ratanbala scored back to back in the 72nd and 73rd minutes respectively to make it 4-0 for Manipur Sangais after resting back for a major portion of the first half and the hosts went home with the scoreline remaining unchanged till the final whistle.
Earlier in the day, Tripura Pythons and Nagaland Wild Hogs played out a goalless draw to share a point each.
With today's results, Manipur are on top of the league standings with 16 points from 5 wins and a draw while Sikkim are second with 14 points from 4 wins and 2 draws in 6 matches.