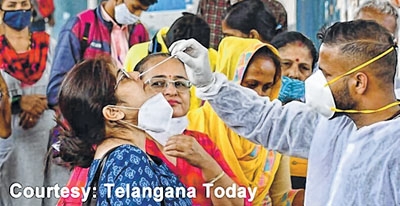 By Our Staff Reporter
IMPHAL, Jul 2 : Manipur returned figures of seven new positive cases in the last 24 hours from amongst the civilians to take the total number of active cases to 31 now.
In the last 72 hours, Manipur recorded 11 new cases, June 30 and July 1 reporting four new cases each and seven new cases today.
The seven new cases were reported from Imphal East (3), Imphal West (3) and Bishnupur (1). The new cases were detected while testing a total of 64 samples to take the daily positivity rate to 10.9 percent.
However the table issued by the IDSP gave the break up of the new cases as Bishnupur (1), Imphal East (2) and Imphal West (4).
Notably the lone positive case from Bishnupur was detected while testing two samples to take the daily positivity rate to 50 percent.
No one was discharged in the last 24 hours leaving the number of active cases intact at 31. No death due to Covid was also reported in the last 24 hours, leaving the total number of lives claimed by the virus unchanged at 2120.
The cumulative number of positive cases in the State now stands at 1,37,281 inclusive of 5014 Central security personnel and the number of recovered cases is 1,35,130 including 5007 Central security personnel.
On June 30 a total of 155 Covid vaccines were administered taking the cumulative number of dosage administered to 29,64,519 inclusive of 12,59,233 second dose and 1,11,967 precautionary dose.
On June 30 a total of 16 D Type oxygen cylinders and 8 B Type oxygen cylinders were made available to different health centres.