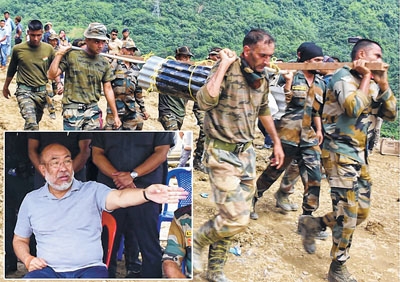 Imphal, Jul 1 (DIPR)
For the second time, Chief Minister N Biren Singh visited Tupul railway construction camp, Noney where the unfortunate landslide had occurred leaving several casualties and personally reviewed the rescue operation being taken up at the site today.
He also visited the landslide area yesterday to see the situation.
Briefing the media at the spot, N Biren termed the massive landslide as one of the worst incidents to happen in the State adding that 81 persons had been affected, out of which 18 persons had been rescued.
He continued that the rescue operation team consisting of Manipur Police personnel, NDRF, SDRF and Army personnel had recovered eight more bodies today in addition to eight other bodies which were recovered yesterday.
Due to the soft condition of the soil, the road leading to the actual area of landslide couldn’t be restored, he said, stating that the State Government has been putting in all efforts to recover the missing persons.
The Chief Minister expressed gratefulness to Prime Minister Narendra Modi and Union Home Minister Amit Shah for showing deep concern and providing assistance by sending NDRF personnel.
He was hopeful that all the missing persons would be found within the next 2 to 3 days.
Biren informed that an equipment (Through Wall Radar system) had been brought from Ladakh by the Army which could locate whereabouts of the dead bodies.
The Chief Minister lauded the rescue operation team for their tireless efforts to recover the missing persons.
Biren was accompanied by Works Minister Govindas Konthoujam, Relief and Disaster Management Minister Awangbow Newmai, Social Welfare Minister Heikham Dingo, Transport Minister Khasim Vashum, Chairman, Hill Areas Committee and MLA of Nungba AC Diganglung Gangmei, MLA of Keirao AC Lourembam Rameshwor Meetei, MLA of Tamenglong AC Janghemlung Panmei, Chief Secretary Dr Rajesh Kumar and other senior civil and police officials, among others.