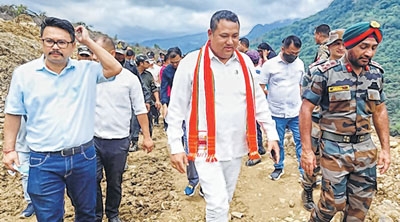 By Our Staff Reporter
IMPHAL, Jul 2 : A team consisting of Minister of Water Resource, IPR and Parliamentary Affairs Minister (Assam), Pijush Hazarika; CAF & PD and PHED Minister L Susindro and Health & IPR Minister Sapam Ranjan inspected the rescue operations of the recent massive landslide in Noney district today.
Speaking by the sideline of the inspection, L Susindro said that the team comprising of two Ministers from the State had been sent on the inspection visit under the supervision of Chief Minister N Biren Singh.
The Government has put in all its efforts in trying to recover the missing persons, he said and added that a whole family from the village are among those missing.
Commending those involved in the rescue operations, the PHED Minister also handed over various eatables to Noney DC to be distributed to rescue operation personnel.
Dr Sapam Ranjan assured that if weather conditions improve, then the rescue operation can be intensified and successfully completed very soon.
Stating that 7 persons from Assam had perished in the catastrophic landslide, Pijush Hajarika said that he had been instructed to inspect the site and rescue operation by Chief Minister Himanta Biswas Sarma.
He added that 5 others from Assam had been rescued and are recovering in a hospital while 15 are still missing. Among the missing 15, one is a Railway Officer while the rest are construction company workers, he informed.
Further, Pijush Hajarika said that efforts are underway to send the mortal remains of the seven deceased persons to their homes and the Assam Government is all set to receive the injured survivors.
He assured that rescue operations will be carried out until all missing persons have been recovered.
The inspection team was also accompanied by Bobby Waikhom,  Commissioner,  CAF & PD; Robertson Asem, Director,  CAF & PD; Shangreiphao Vashumwo, Chief Engineer PHED and several engineers.
Separately, representatives of Manipur Democratic Alliance (MDA) also visited the site and distributed eatables and first aid kits to the rescue workers.
M Tombi, convenor MDA and president of Shiv Sena Manipur unit recommended carrying out soil testing before committing to construction of railway tracks in the future.
Ph Jilashana Sharma, vice chairman MDA and K Khagendra, co-convenor MDA were also part of the inspection visit.