Intensive search continues at tragedy site, 13 more bodies found to take death toll to 34; 33 yet to be traced Fresh landslide scare near Marangching, no casualties reported 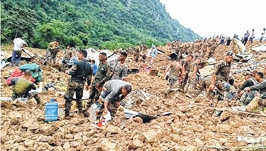 By Our Staff Reporter
IMPHAL, Jul 2 : At leaast 13 more bodies were recovered from landslide hit Marangching area in Noney district today as the death toll rose to 34 while 33 were reported missing till the time of filing this report.
Amid the search operations, another landslide occurred near the tragedy site, as per Manipur Mountaineering and Tracking Association (MMTA), but no casualty was reported.
The fresh landslide occured near the 107 Territorial Army Camp, where search operations are continuing for the third day.
According to initial reports, there is no loss of life or property in Saturday's landslide.
An office memorandum issued by Noney Deputy Commissioner Haulianlal Guite said that the 29 people who lost their lives in the disaster include 20 personnel of 107 Territorial Army, six workers of Venkata Rai Construction Private Limited and one employee of Bharatiya Infra Private Limited (BIPL) and two unidentified persons.
On the day of the tragedy (June 30), eight corpses (seven TA personnel and one VSC worker) were recovered from the landslide hit area while 18 injured (13 TA personnel and five VSC workers) were rescued.
In the follow up rescue operation, 13 more bodies (eight TA personnel, four VSC workers and one BIPL employee) were recovered from the site on Friday.
Among the eight bodies tracked down today, five are TA personnel, one is a VSC worker while the remaining two are unidentified.
After an autopsy at JNIMS, identities of six more deceased have been confirmed today. They are  Rifleman Shubam Kumar Singh (26) from Bihar, Rifleman SK Mahiuddin Ahmed (31) from West Bengal, Havildar Santu Banerjee (37) from West Bengal, Havildar Bikram Sarki (42) from West Bengal, Rifleman Sanjay Debnath (36) from Tripura and Prasanta Deb (28) from Tripura. All six of them were TA personnel.
Last evening, West Bengal Chief Minister Mamata Banerjee said in a tweet that nine jawans from her State have died in the incident.
"Shocked to know that nine jawans of the Darjeeling hills (107 Territorial Army unit) are among the casualties in the Manipur landslide. Deeply mourn the demise and extend all solidarity and support to the next of kin. Heartfelt condolences," Ms Banerjee said, reported NDTV.
Reportedly, autopsies of the six corpses which were deposited at RIMS morgue yesterday were also conducted today after their identities were confirmed. They are Upendra Kumar from Uttar Pradesh (BIPL employee), Harmohan from Assam (VSC worker), Sanjot Oraon from West Bengal (TA personnel), Dipankar from Assam (VSC worker), Sahajahan Lashkar from Assam (contract driver of 107 TA) and Palab Phukan from Assam (VSC worker).
Reportedly, 35 earthmover machines are being deployed to track the remaining bodies trapped under the debris of the massive landslide.
The 38 missing, as per the Government bulletin, includes 12 TA personnel, 12 VSC workers, three railways staff, two BIPL staff, five civilians and four unidentified persons.
The rescue operation began at 4 am today by hundreds  of NDRF, SDRF, MMTA, police, Assam Rifles, Fire Service personnel along with 25 local volunteers.
The memorandum issued by Noney DC advised the people to be on alert as crack has started developing at the same  site where the massive landslide took place on June 30.
In another statement, Haulianlal Guite said that the flow of Ijei River has been obstructed by the debris, creating a dam like storage in the nearby areas which if breached  will wreak havoc to the low lying areas of Noney district.
He informed that efforts are on to clear the channel and ensure the safe outflow of the stored water.
The Deputy Commissioner asked the people to take  precautionary measures, avoid taking children to the adjacent  places of the river and evacuate if necessary.
Haulianlal Guite also shared helpline numbers - relief materials (EE-DRDA- 7005000344), health (CMO Noney - 08730935885) and control room (SDO Haochong - 08414876531) for the public who need assistance.
Meanwhile, a press release issued by PIB (Defence Wing) said that a fresh rescue team has been sent to Noney to augment the search operation at the landslide hit area where more people are feared buried.
It said that Through Wall Radar and rescue dogs are also  being deployed to find the missing people.
So far 13 Territorial Army personnel and 5 civilians have been safely rescued, while mortal remains of 18 Territorial Army personnel and 6 civilians have been recovered so far.
Mortal remains of 14 personnel including 1 JCO and 12 other ranks of Territorial Army personnel have been sent to their respective home stations by two IAF aircrafts and an Indian Army helicopter, while the mortal remains of the person from Kangpokpi have been sent to his home town by road after a wreath laying by GOC Red Shield Division and IG IGAR (South) at Imphal today. Search for 12 missing Territorial Army personnel and 26 civilians still continues, it added.