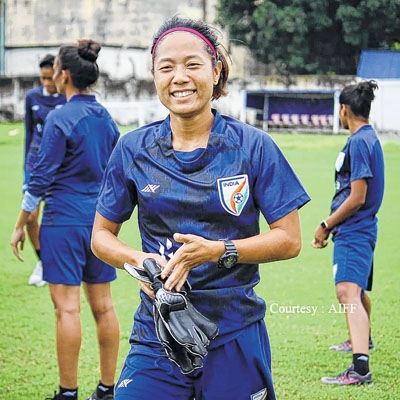 By Our Staff Reporter
IMPHAL, Jul 2 : Dangmei Grace from Manipur has become third Indian women footballer to get a professional contract with a foreign club as she signed up for the Uzbekistan Super League club FC Nasaf.
Dangmei Grace, daughter of Dangmei Simon and Rita Simon from Dimdailong village in Churachandpur district is set to leave Manipur tomorrow for Delhi before she catches her flight to Uzbekistan on July 4.
She became third Indian Women to earn foreign club contract after Bala Devi signed up for Rangers FC (Scotland) back in 2020 and Aditi Chauhan signed with Icelandic club Hamar Hveragerdi last year.
In a telephonic conversation with The Sangai Express, Dangmei Grace who was on a very brief sojourn at her birthplace following a U-23 Three-Nation tournament (India -Sweden-US) hosted by Sweden expressed delight over the new signing.
"To represent their country and to play for big clubs is every footballer's dream," said an elated Indian forward who is feared for her electric pace, and exceptional dribbling skills.
"I am extremely delighted and hoping that my experience at Uzbekistan's top flight club will serve as a stepping stone to scale further success," she said. The 26 year old graduate was also enthusiastic about the new experience she was about to have in Uzbekistan's top flight tournament.
Further on her new singing, Dangmei who kicked off his professional career with KRYPHSA FC back in 2009, stated that she actually got the offer back in March this year following her noteworthy campaign in AFC Women's Club Championship 2021 held in Jordan.
But her signing was delayed due to busy and extended tournament schedules and National camps, said Dangmei Grace who has helped Manipur win four National championship gold medals since 2010 and a gold medal in National Games hosted by Kerala in 2015.
Dangmei, who was adjudged the 'AIFF Emerging Player of the Year' in 2019, has also helped Manipur finished runners up in the 21st Senior National Women’s Championship 2016 hosted in Madhya Pradesh, 23rd Senior National Women’s Championship 2017 held in Orissa and Under-14 National Women’s Festival 2010 at Chennai. She has also carved out a niche of her own by being a part of gold medal winning Indian team at the 12th South Asian Games, 2016 Meghalaya; 4th SAFF Women’s Championship 2017, Siliguri; 5th SAFF Women’s Championship 2018, Nepal and 13th South Asian Games 2019, Nepal.
Dangmei Grace, who has so far appeared for India 45 times and scored 12 goals, was signed by Indian Women League (IWL) club Sethu FC in 2019 after her illustrious club campaign with KRYPHSA FC and helped the team lift the title. She also won  IWL 2021-22 with Gokulam Kerala after joining the club last year.