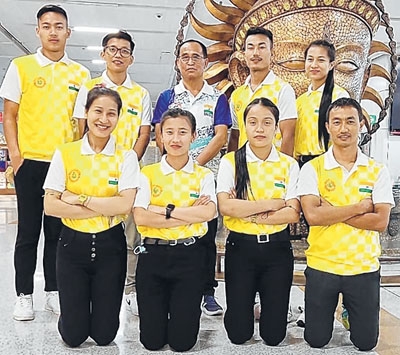 By Our Staff Reporter
IMPHAL, Jul 3 : In all, 8 State players including three men and 5 women are in the Indian Sepak Takraw contingent who have left India for Thailand for a 20-day pre championship abroad training camp being organised ahead of the 35th King's World Cup.
The contingent left India yesterday from Delhi as the camp commenced today in view of the  35th King's World Cup which is scheduled to be held from July 23 to 31 in Bangkok, Thailand.
The State players who have headed to Bangkok for the pre championship camp are:
Men: Kh Niken Singh, L Amarjit and L John Meitei; and
Women : O Jimi, E Priya Devi, E Shilpa, S Elizabeth and W Sanajaobi Chanu.