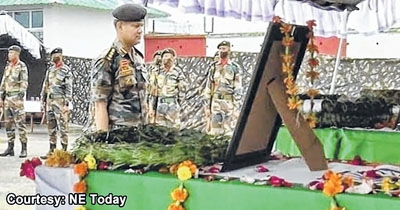 IMPHAL, Jul 4 (ANI)
The mortal remains of five Army personnel, including a Lieutenant Colonel of the Territorial Army killed in the Noney landslide, have been sent to their respective home stations on Monday by an Indian Air Force aircraft.
They were given full military honours at the Imphal International Airport by GOC Red Shield Division & IG IGAR (South) this morning.
Manipur, already reeling from the first landslide hit on the 29th of June was hit by another landslide on July 1.
The landslide hit the Noney area of Manipur on the intervening night of June 29 and 30 near the company location of 107 Territorial Army of the Indian Army deployed near Tupul Railway Station for the protection of the under-construction railway line from Jiribam to Imphal.
The North-East Frontier Railway CPRO said the landslide triggered by incessant rains caused damage to the Tupul station building.
Earlier on July 1, Chief Minister N Biren Singh termed the landslide as among the worst incident in the history of the State. Singh also visited the site to encourage the personnel engaged in rescue operations.
"It is the worst incident in the history of the State. We have lost people's lives of which 18 including a territorial army (personnel) were rescued. Around 55 persons are trapped. It will take 2-3 days to recover all the dead bodies," Singh said.
Prime Minister Narendra Modi on Thursday reviewed the landslide situation caused due to incessant rainfall in Manipur with Chief Minister N Biren Singh and assured full possible support from the Central Government. ANI