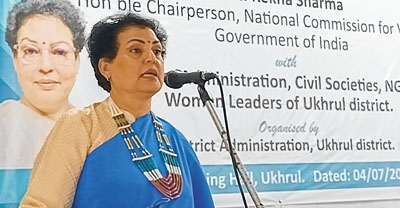 Mungchan Zimik
UKHRUL, Jul 4 : National Commission for Women (NCW) Chairperson Rekha Sharma has stated that North East women should look beyond Government jobs while speaking at an interactive session at Ukhrul today.
The one day interaction programme of NCW Chairperson Rekha Sharma with Ukhrul district administration, civil societies, NGOs and women leaders of the district was organised by Ukhrul District Administration at DRDA Training Hall, Mini Secretariat Hamleikhong, Ukhrul.
Rekha said that the purpose of her maiden visit to Ukhrul is to take stock of the ground situation and return to solving the  problems of the people, particularly the women community.
During the interaction programme, the NCW Chairperson announced that family counselling centres will now be looked after by the National Commission for Women and assured of their smooth functioning.
She further mentioned that she wants to empower women in all service sectors to bring socio-economic changes across the North East region of India through the intervention of the National Commission for Women.
Rekha further informed the gathering about the ambitious Central and State projects and schemes that encourage and provide financial and technical support to the women to start their entrepreneurial journey.
She assured that she will address problems and issues in marketing facilities, transportation, internet etc at the higher level to provide proper facilities at the earliest.
Thingreiphy Lungharwo, president, Tangkhul Shanao Long (TSL) spoke about the formation of Tangkhul Women League in the seventies.
According to her,  the Indian security forces perpetrated rampant human rights violations against the civilians in Ukhrul and Kamjong district under the draconian "Armed Forces Special Powers Act '' (AFSPA).
Citing the incidents of Kumram and Grihang village, she remarked that the atrocities committed against the people were beyond atrocious.
She recalled that a woman identified as Rose from Kumrah committed suicide after losing her chastity while another girl, Luingamla, was shot dead for resisting sexual assault.
She added that ASFPA is a symbol of oppression, hate for humanity and abject discrimination.
The TSL president then spoke about the organisation saying that it is a mass based movement organization and its multi tasking roles range from maintaining household provision, stopping violence against women, promoting political participation of women, fight against anti-social activities, responding to any emergency situations, conflict management etc for the betterment of society.  Altogether 259 women units from all Tangkhul villages are affiliated with TSL, she said.
Lastly, she submitted a memorandum to the visiting NCW Chairperson appealing for the withdrawal of AFSPA from all hill districts of Manipur.
Rekha also expressed deep concern and went on to say that times have changed and  urged the women community to acknowledge the positive sides of the Army.
She also said that being border areas, the presence of Army is necessary and they are here to help the people in all emergency cases such as landslides, flood and any natural calamities apart from defending the country.
Former NCW member Soso Shaiza lauded the visiting NCW Chairperson for giving special attention to North East people.
Rekha also personally arranged an appointment for 10 women to meet Prime Minister Modi at Delhi.
During the interaction programme, activist Rinyuiwon Vashum raised various issues faced by women in the district and appealed for immediate intervention.
Later, the NCW Chairperson planted a pine tree at the Mini Secretariat compound.