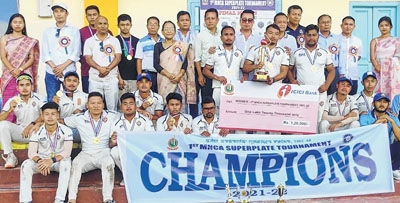 By Our Staff Reporter
IMPHAL, Jul 5 : Chabungbam Ishorjit's knock of unbeaten 71 helped RULE, Malom beat MPSC, Manipur Central Jail by 5 wickets in the final match of the inaugural edition of MNCA Super Plate Tournament 2021-22 here at Luwangpokpa Cricket Stadium today.
RULE opted to field first after winning the toss and restricted MPSC to a meagre 122 for 8 in allotted 35 overs with the help of a cautious bowling department. They chased down the target within 28.4 overs with 5 wickets left in hand as Chabungbam Ishworjit smashed six fours and two sixes on the way to his unbeaten 71 off 75 balls.
Put in to bat first, MPSC were given a torrid time from the beginning and lost Sagolshem Sunil for 1 to pacer Thokchom Kishan in the first delivery of the third over when the scoreboard read just 5.
MPSC further slipped to 10 for 2 in the 6th over when Potsangbam Bonem edged to RULE wicketkeeper Ishworjit behind the stump off Md Karim's ball to walk off on 2.
Gelson Singh who was trying to ease the pressure got holed out to Nongthombam Denin off Nongthombam Sarojkumar's delivery for 13 runs in the 11th over before Ananda trapped Keisham Kennedy lbw for 5 in the 18th over to make the scoreboard read 49 for 4.
Wickets kept tumbling and the run rate further dipped as  Jay Singh Haorakcham undone Laishram Kipajan for 22 before Ananda (2/16 in 3 overs) bowled out Sarangthem Shangkar on 3-ball duck and to hold MPSC to 50 for 6 in the 20th over.
Soubam Kingson then blazed off 21 runs off 23 balls to give MPSC some hope but fell victim to Nongthombam Denin (2/15 in 7 overs) who also dismissed Ngangom Sudesh for 7 for the 8th wicket as the 28th over was completed.
Indraban (17 off 23 balls) and Maibam Bijoykumar (16 off 20 balls) were unbeaten on the crease as the innings wrapped up.
In the chase, RULE were also slow off the blocks and were reduced to 7 for 1 as Sanjenbam Suresh was trapped lbw by Maibam Bijoykumar.
Even as things went slow, Chabungbam Ishworjit and Jay Singh Haorakcham kept the scoreboard ticking before Jay Singh (14) fell for the second wicket to Keisham Kennedy in the 10th over.
They further slumped to 41 for 3 as Ayekpam Rakesh got run out on 2 but Ishworjit and  Sanjembam Somokanta (21) forged a 67-run fourth wicket partnership to steer RULE past the 100 run mark.
After losing Somokanta in the 27th over, Rajkumar Herachandra (1) was bowled out by Sarangthem Shangker for the fifth wicket but it was too late for MPSC as Ishworjit (71) and Thokchom Kishan (6 off 3 balls) finished off the chase with 5 wickets and 38 balls left to spare.
Winners, RULE were feted with a cash prize of Rs 1,20,000 along with trophy and certificates while runners up MPSC had to content with a cash prize of Rs 80,000 along with trophy and certificates. Jay Singh Haorakcham of RULE was adjudged man of the series (cash prize of Rs 10,000) and highest wicket taker award (Rs 5,000) for his impressive performance throughout the tournament (297 runs and 25 wickets in 9 innings). Meanwhile Hamza Rehan Sayyed of KSDO who stacked up 350 runs in 7 innings emerged highest run scorer and was feted with a cash prize of Rs 5000 along with certificate and trophy while man of the final match, Ishworjit was feted with a cash prize of Rs 3,000 and a trophy.