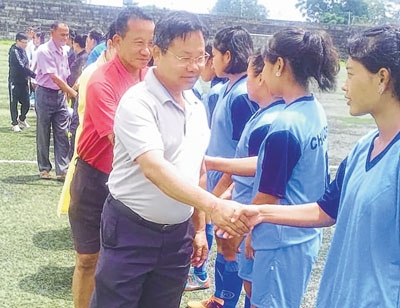 By Our Staff Reporter
IMPHAL, Jul 6 : The State Level Inter School Subroto Mukerjee Football Tournament-2022 for U-17 girls kicked off today at Khuman Lampak, Imphal under the supervision of Youth Affairs and Sports, Government of Manipur.
The opening day of the tournament saw Bishnupur thumping Chandel 3-0; Imphal West cruising to 3-1 win over Churachandpur and Pherzawl edging past Thoubal 2-1.
In the Group A opener, Madhumati Government High School representing Bishnupur district faced stiff opposition from Maha Union Government High School, Chandel in the first half but produced a dominating display of attacking football in the latter half to clinch a 3-0 win.
It was Geetarani who broke the deadlock in the 33rd minute before Babita doubled the lead in the 42nd minute. Silky then sealed the deal in the 52nd minute as Chandel girls failed to make the most of the chances.
In the Group B opener, Hoineihat scored a brace (5', 25') to inspire Wangoi High School representing Imphal West a comfortable 3-1 win over Tuibuang Govt HS representing Churachandpur district.
The other goal for the Imphal West team came up in the 57th minute via Nandeshwori after Ruby Thi had pulled back a goal for the Churachandpur side in the 32nd minute.
Later in the group C opener, Pherzawl's Bukpi Govt HS stunned Yairipok HS of Thoubal 2-1 courtesy a brace from Hoihnunjem (38', 51') after the two sides played out a barren first half.
Thoubal side's Bhumika pulled back a goal in the 58th minute but it was too late for them to make a comeback and eventually the Pherzawl side walked home 2-1.
Tomorrow's matches
Imphal East vs Ukhrul
Bishnupur vs Kangpokpi
Imphal West vs Tamenglong and
Thoubal vs Jiribam