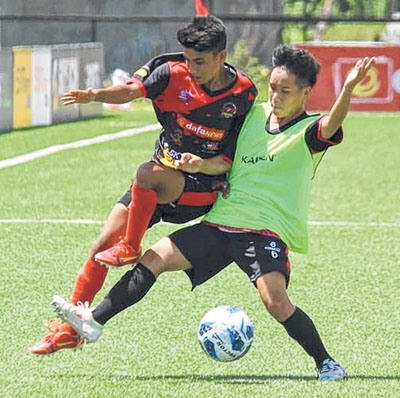 By Our Staff Reporter
IMPHAL, Jul 7 : Arunachal Pradesh Tigers beat Tripura Pythons 2-0 as Meghalaya Leopards crushed Assam Rhinos 6-1 in the opening day matches of the inaugural North East Women's Football League Tournament being organised by the All Manipur Football Association under the sponsorship of Anantpura Sports Events Pvt Ltd, Rajasthan.
Kai Rumi took centre stage in the opening match as she scored a brace in the second half to hand Arunachal Pradesh a comfortable 2-0 win over Tripura Pythons here at SAI Ground, Takyel.
The opening half went barren even as the two sides traded numerous runs including few close calls but Kai Rumi ended the wait in the 57th minute before adding another in the 62nd minute to hand Arunachal Pradesh Tigers a 2-0 lead.
Tripura Pythons struggled to cut the gap in the later part of the game but the Arunachal Pradesh side held on to their lead to seal all three points.
Elsewhere in the second league match, Nisilia scored thrice and Sunalinda hit a brace to guide Meghalaya Leopards to a 6-1 win over Assam Rhinos.
Assam Rhinos took an unexpected lead after 9 minutes of the game thanks to Darathiuria but the Meghalaya team rallied back and pulled level via Nisilia strike in the 35th minute.
Nisilia overturned the lead in the 37th minute before Jawang Lang (40+1') and Sunalinda (40+2') added a goal each to help Meghalaya Leopard enter into the break with a 4-1 lead.
Meghalaya Leopards looked to take control of the game after the restart as well and it was Sunalinda further extended the lead by completing her brace in the 63rd minute before Nisilia rounded off the scoring in the 69th minute.
Even as the tourney kicked off, spectators have expressed concern over certain aspects which were seemingly deviating from standard game rules.
In contrast to the expected grand opening, the opening of the tournament participated by 8 teams of North East States turned out to be low key.
Further, overcrowding of advertisement logos forcing shrinkage of jersey numbers of players was very apparent against the prescribed rule (Law of the Game : Law No 4). What caught the eyes of all was the clashing of jersey colours of the opening match teams and eventually one team had to use bips.
Further based on the fixture, the spectators noticed that maintenance of recovery period for the participating team was also overlooked as the Tripura side have to play Assam Rhinos tomorrow in the third match and Meghalaya Leopards have to play Arunachal Pradesh Tigers in the fourth match.
As such, the organisers need to look into the matter and ensure teams the necessary recovery period as provided in standard tournaments in India and across the world, spectators opined.