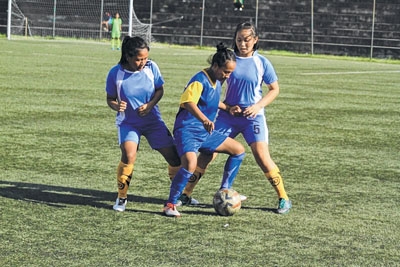 By Our Staff Reporter
IMPHAL, Jul 7 : Imphal East kicked off their Group D campaign of the State Subroto Mukerjee Football Tournament for U-17 girls with a 9-0 win against Ukhrul today at Artificial Turf, Lamlong Thongkhong.
Th Reshma shone with a treble (8', 45', 50') in these one sided match hitting the opener for Free Progress Academy of Imphal East in the 8th minute while K Anju (28', 30') and L Lamnganbi (54', 59') scored brace. K Mangpineng (25') and L Juring (14') were also on target for the winning side as Ukhrul girls remained clueless.
The Imphal East team were in control of the game from the beginning and led the first half 4-0 before completing the 9-0 rout of the first leg of the Group D (only two teams) competition.
Later in a Group A league match, Madhumati Govt HS of Bishnupur district cruised to a similar 9-0 win over Kangpokpi team represented by Eklavya Model Residential School and confirmed their semi-final ticket.
The Bishnupur side ran riot from the word go and it was O Babita who hit the opener in the 11th minute before completing her brace 8 minutes later.
L Priyadarshini took charge of the attack and she was rampant as she broke through Kangpokpi team defence at will and banged in four goals alone (22', 27', 43', 54').
L Bijeiya also assisted in the attack and scored twice (30', 40') while B Retika (32') added once to ensure their team sealed the last-four round berth.
The third match (Group B) saw Imphal West's Wangoi HS trounce Tamenglong's Don Bosco HS 18-0 for the second straight win courtesy five goals each from Hoineihat (3', 6',10', 20', 38') and L Menaka (5', 8', 9', 12', 32').
N Nandeshori (27',31', 40') also shone with a treble as Kimte Langel (18', 19') and Th Remi (5', 21') netted twice and T Thoibisana scored a goal in the 14th minute.
Meanwhile in a Group C league match, RK Sanatombi Vidyala, Jiribam edged past Yairipok HS of Thoubal 2-1 to knock out the later team from the tournament. It were Jennyfer (6') and Malsawmkim (39') goals which sealed the Jiribam team's victory today while the lone goal of the losing team was scored by Kh Bhumika in the 41st minute.
Tomorrow, Jiribam will play Pherzawl in a crucial match which will decide the group winners.