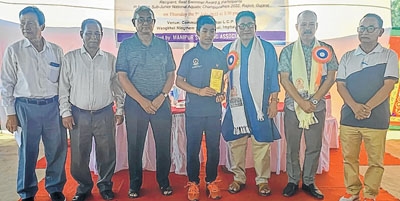 By Our Staff Reporter
IMPHAL, Jul 7 : Young swimmer Laitonjam Lanchenba who fetched five medals including four gold at the recently concluded 38th Sub-Junior National Aquatic Championship 2022 was accorded a warm reception today at Ningthem Pukhri Mapal community hall by Manipur Swimming Association.
The programme was attended by Arunkumar Thangjam, MLA Wangkhei AC; Dr RK Nimai (IAS Retd); Sunil Salam, founder Central Swimming Club and T Thouba, president, Manipur Swimming Association as dignitaries who also motivated the young athlete and his coach cum manager, H Gojen at the occasion.
Speaking at the occasion, Arunkumar not only extolled the young swimmer who participated in the boys Group-3 category events and brought home 5 medals but also noted that those who have helped groom the child are worth appraisal.
Dr RK Nimai, in the meantime raised concern over the "growing undesirable scenario" of Manipur sports due to ever growing political influence and involvement in sports associations.
He lauded the State Government for the various provisions being made for meritorious athletes, but decried the Government's lack of concern over the degrading state of apex bodies of sports and issues pertaining to them.
Taking note of the State's declining performance in National Games, Dr RK Nimai also stressed on the need of giving emphasis in athletics and swimming where athletes have a high scope of winning multiple medals.
It may be noted that Lanchenba, son of L Kanta and Sonia Devi of Singjamei Thokchom Leikai bagged four gold medals in 100 m breaststroke with a time of 1:21.37; 50 m breaststroke event with the best time of 38.38 seconds; 50 m butterfly (30.71 seconds) and 50 m freestyle (29.38 seconds) and a silver medal in the 200 m medley.
He was also adjudged best swimmer at the championship which was held from June 24 to 26 at Rajkot, Gujarat.