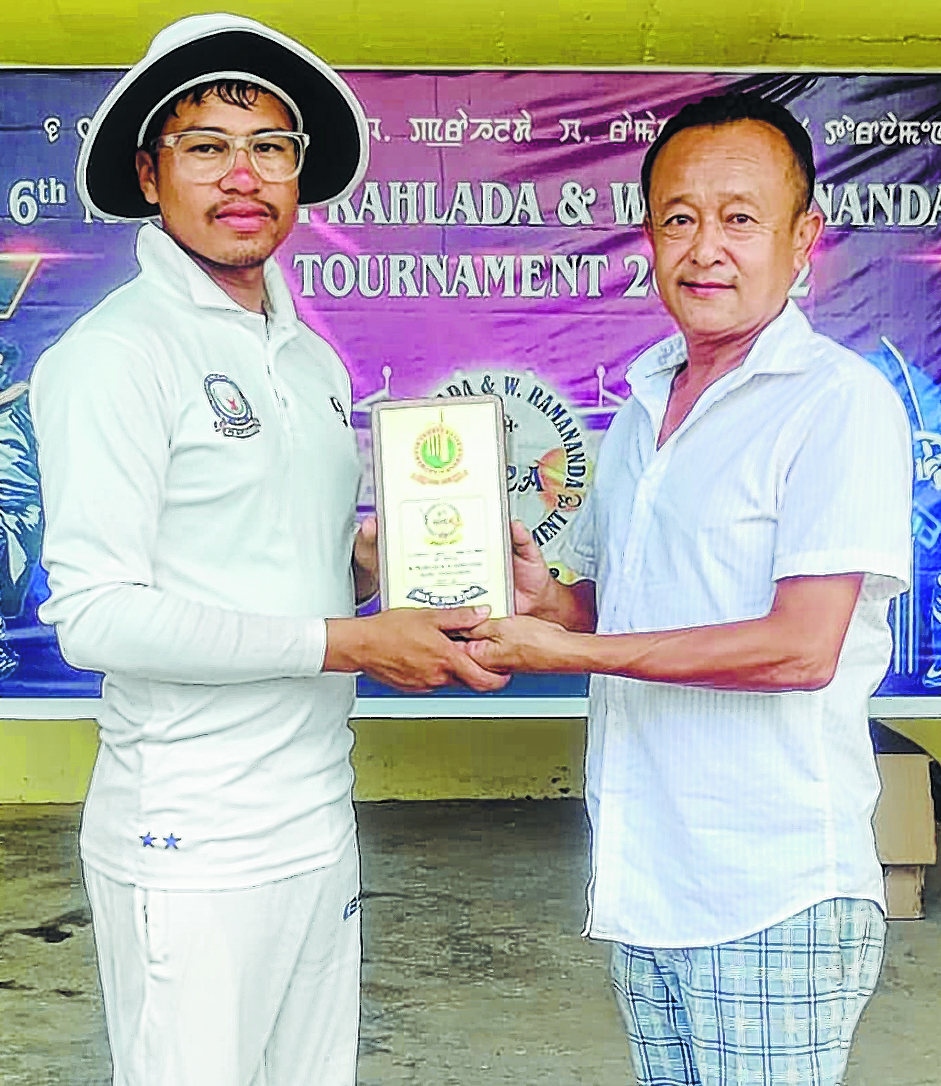 By Our Staff Reporter
IMPHAL, Jul 8 : Al-Ameen, Lilong beat CYCLONE, Thangmeiband by 3 runs via DLS Method in a rain hit Group B league match of the 6th MNCA W Prahlahda and W Ramananda Elite Tournament today at Luwangpokpa Cricket Stadium, Luwangsangbam.
Al-Ameen bundled out for 154 runs in 34.3 overs (35 overs an innings) after winning the toss and electing to bat first and CYCLONE were 146 for 8 in 34.1 overs in reply before a sudden downpour rendered the field unplayable. Eventually, DLS method was used and Al-Ameen were adjudged winners by 3 runs.
With the win, Al-Ameen are second in the league table with four wins in five matches as BLUE Hawk are atop with four wins but with better Net Run Rate.
In Al-Ameen's innings, Md Basir Rahaman had to see his partners- Nawaz (7), Muhammed Al Bashid (7) and Mustaque Mohammed (7) depart cheaply but he stood firm and clobbered 4 fours and 1 six on the way to his knock of 61 runs in 69 balls.
Bashir Rahaman was however trapped lbw by Nongmaithem Suraj in the 23rd over when the team were 3 runs away from making 100 run mark.
Md Nasirshah Alam (7) and Md Safwan (9) also had short stay before Boboicha notched up 31 runs late on to take the tally to 154.
Kishan Laishram was the pick of CYCLONE bowlers claiming three wickets for 10 runs in his spell of 7 overs of which 3 are maidens while Bikash Singh (2/46 in 7 overs) and Longjam Ronald Meitei (2/10 in 2.3 overs) fetched two wickets each.
Loktongbam Santosh Meitei, Laishram Roshan Singh and Nongmaithem Suraj also bagged a wicket each in this innings.
Needing 155 for the win, CYCLONE got off to a flying start with Narsingh Yadav (33) and Jenpu Kamei (18) adding a 55-run first wicket partnership.
Things started turning around after Narsingh Yadav went lbw out to Noushad Ali who also went on to scalp Kishan Laishram (12) and Longjam Ronald (34) to reduce CYCLONE to 119 for 4 in 28 overs.
The remaining order also failed to keep up the fight and Maisnam Raju (8) and Nongmaithem Suraj (0) were on the crease before the sudden heavy downpour stalled the game and forced DLS method to decide the winners.
Had CYCLONE batters been cautious, they could have won the game with ease but luck favoured the Lilong side.
Bashir Rahaman who top-scored for Al-Ameen was adjudged man of the match.
CHAMP, Khagempalli will play SCCC, Singjamei in another Group B League match tomorrow.