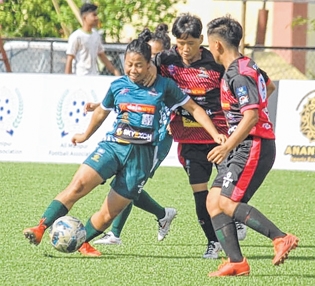 By Our Staff Reporter
IMPHAL, Jul 8 : Pokhila Boro scored a stoppage time goal to help Assam Rhinos earn  3-2 win over Tripura Pythons in the third encounter of the 1st North East Women's Football League Tournament being underway at SAI Ground, Takyel.
Assam Rhinos and Tripura Pythons were tied at 2-2 before the break and were heading to a draw before Pokhila Boro scored the last gasp goal to make the difference for Assam Rhinos.
It was a competitive start for both the sides and Sampili Jamatia drew first blood to hand Tripura Pythons the lead after 12 minutes only to be equalised by Sonia Marak three minutes later.
Pokhila Boro overturned the lead scoring her first in the 21st minute but Tripura Pythons rode on Panchami Debanati goal in the 38th minute to pull level before the break.
The second half was an end to end affair with the two sides, having lost their opening games, struggling to find the winner. Their efforts however failed to bring results until Pokhila dug deep into the stoppage time to complete her brace and sealed the winner.
Elsewhere in the fourth match of the tournament, Yumlam Lali scored a brace to help Arunachal Pradesh Tigers beat Meghalaya Leopards 3-1 for the second straight victory.
The two sides held off one another in the opening half to play out a goalless draw but Yumlam Lali scored two goals back to back in the 45th and 61st minutes to steer Arunachal Pradesh Tigers to a clear 2-0 lead before Kai Rumi made it 3-0 after 74 minutes.
Meghalaya Leopards however sealed a consolation goal late in the added time (80+1') via Nisilia Majaw to make it 1-3 at the end.
Sikkim Pandas will play Mizoram Black Bears in the 5th match tomorrow from 12.30 pm before Nagaland Wild Hogs square off against Manipur Sangais in the 6th match from 3 pm onwards at the same venue.