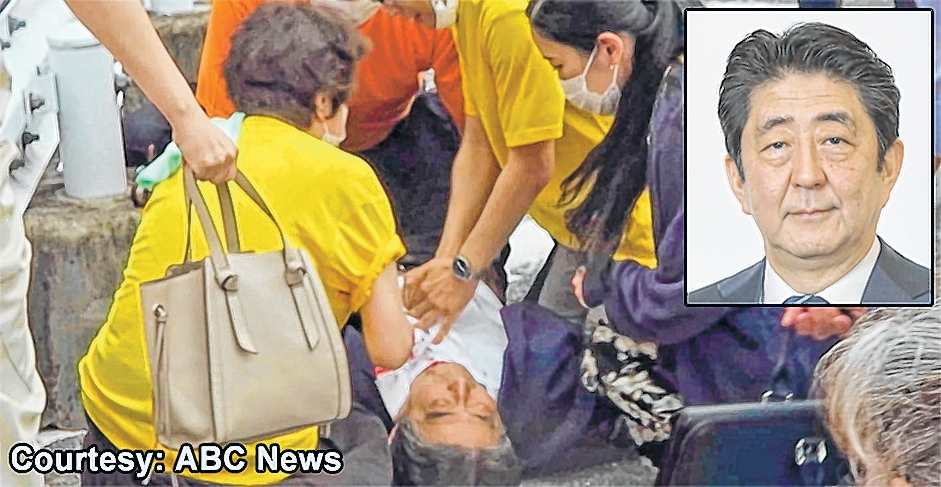 NARA, Japan, Jul 8
Former Prime Minister Shinzo Abe, Japan's longest-serving leader, died on Friday hours after he was shot while campaigning for a Parliamentary election, shocking a country in which political violence is rare and guns are tightly controlled.
A man opened fire on Abe, 67, from behind with an apparently homemade gun as he spoke at a drab traffic island in the western city of Nara, Japanese media reported.
It was the first assassination of a sitting or former Japanese premier since the days of prewar militarism in 1936.
Doctors struggled to save Abe but he died at 5.03 pm (0803 GMT), about five and a half hours after being shot.
He bled to death from two deep wounds, one on the right side of his neck, a doctor told a Nationally televised news conference. The former leader had no vital signs when he was brought in.
Speaking before Abe's death was announced, Prime Minister Fumio Kishida condemned the shooting in the "strongest terms" while Japanese people and world leaders expressed shock.
"This attack is an act of brutality that happened during the elections - the very foundation of our democracy - and is absolutely unforgivable," said Kishida, struggling to keep his emotions in check. Police said a 41-year-old man suspected of carrying out the shooting had been arrested. NHK quoted the suspect, identified as Tetsuya Yamagami, as telling police he was dissatisfied with Abe and wanted to kill him.
Abe was making a campaign speech outside a train station when two shots rang out. Security officials were then seen tackling a man in a grey T-shirt and beige trousers.
Reuters