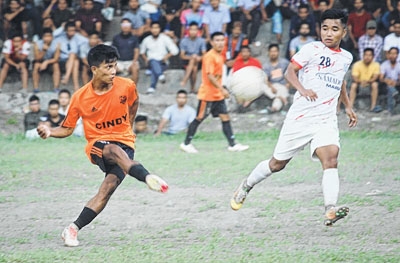 Our Correspondent
KANGPOKPI, Sep 9 :  Well-packed audience at Brig M Thomas ground was seen visibly inspired to witness a female medic as they cheered aloud every time Sagolband United female medic rushed to an injured player for first aid in a group D encounter between the MSL team and Taphou Football Club in the second match today.
The MSL team Sagolband United and Taphou Football Club played their second pre-quarter-final league match after both teams had a draw in their first respective match.
Normally, only male medics from the local clubs were seen in any football tournament so far played in Brig M Thomas ground. Thanks to Sagolband United, the audience witnessed female medic for the first time at the aged playground which definitely would motivate the local clubs to recruit female medics and would also set a good example for woman empowerment.
The MSL team had a hard time breaking the tough defense line of the Taphou Football Club till Vami Longvah found a brilliant opener in the 38th minute to seal the first half 1-0. Taphou Football Club made a better comeback in the second half with multiple shots on-target from their strikers but Sagolband United's custodian was brilliant enough to keep them at bay.
Taking advantage of the exhausted Taphou FC players, the MSL team pushed forward with more pressure to find another goal in the 60th minute through Shunjanthan to lock the game 2-0.
Earlier, the group D encounter between Football Club Gorkha 11 Manipur and AMFA Cup team Youth Organization Sporting Club (YOSC), Khurai ended in a 1-1 draw. Luv Chhetri converted a penalty kick in the 20th minute to hand FC Gorkha 11 the lead before YOSC Khurai's equalized right after the second half through Laishram Daniel (46').
Tomorrow, Twilang Area Sporting Association (TASA) will play Saikotjang Youth Club in the first match while KLASA-Keinou will clash with Satkhohen and Sumkhomang Memorial Team (SSMT) in the second match.