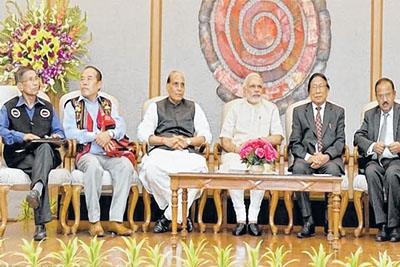 NEW DELHI, Sep 10
There is a critical and signi-ficant forward movement in Naga peace talks. Repre-sentatives and officials of the Central Government recently visited the Northeast, including Guwahati and Shillong, and the stalled talks between the NSCN-IM and the Centre have been revived.
The Central team is now working on a new set of Formulation Papers which would include a new and old set of offers to facilitate the inking of a final peace pact at the earliest.
The ball will soon be in the court of militant groups, including the NSCN-IM, whose demands for a separate Naga flag and a consti- tution had practically stalled the peace parleys since October 2019.
A top military commander from the group, which initiated ceasefire and peace talks in 1997, is involved in these crucial and final rounds of discussions. The Centre is more than keen and is already running the 'extra mile to achieve the destination of peace, solution and development for Nagas.
"Elections or no elections, the focus is on the Formulation Papers. It's refreshing...," a source claimed.
Nagaland is inching ahead towards the next Assembly elections by February-March 2023 along with two other northeastern states of Tripura and Megha-laya. While the BJP heads a coalition regime with a tribal-based party in Tripura, it is a junior partner to regional parties NPP in Meghalaya and NDPP in Nagaland.
A delegation of Nagaland legislators and Ministers led by Chief Minister Neiphiu Rio is camping in Delhi to 'push for expediting' the peace process and arriving at an early solution. Rio and his delegation held a meeting with AK Mishra, the peace emissary on behalf of the Centre. Sources are tightlipped on what transpired at the meeting between the Naga delegation and Mishra.
"We know how to keep some secrets... In the national interest, the secrets have been kept secret. However, there is no second opinion that every Naga of the State of Nagaland wants a final solution. They, however, complain about the deliberate delay in peace parleys," a source said.
In quite an interesting turn of events, one leader of the Naga People's Movement for Human Rights (NPMHR) has blamed the Centre for delaying and almost derailing the peace process. As the Government abrogated Article 370 and took away the Kashmir flag and constitution... "A message went around delibe- rately or otherwise that no other State or region can have a separate Flag. Here comes the 'Nagaland issue' and thus this linking between Kashmir Policy and Naga issue was not a wise thing to do," the NPMHR leader said.
The Centre has rejected the twin demands for the Naga constitution and the flag. Nationalists among Naga leaders like SC Jamir, a former Governor to Maharashtra and Gujarat, told this journalist: "There is no need for another Constitution within the Indian Constitution." The 91-year-old Jamir, who has perso- nally met PM Narendra Modi and Home Minister Amit Shah earlier this year says: "All issues have been discussed and finalized since 2019 and now we are only waiting for a solution."
Reviving the peace talks between the Centre and the NSCN-IM is certainly a positive sign and it will expedite the peace process.
The NNPG, an umbrella organization of seven militant groups, led by N Kitovi Zhimomi is already keen on signing a peace pact. This umbrella group maintains peace and solution pact should get priority as Nagas have suffered enough and are now longing for peace and development.
Jamir also insists further delay may not be good either for India's security or for the Nagas too. "Why should it be delayed in the final implementation? For how long will the people of Nagaland be taken for a ride? For how long will they be pawns in the hands of the political people, underground and other anti-social elements? How long will the people of Nagaland remain cut off from the rest of the Nation?" he says.
"For how long the youth of Nagaland will rot in poverty and despair when their counterparts are leading a drastically different life in the rest of the country," Jamir wrote in another and a most recent article published in Nagaland newspapers on September 9. The veteran leader, who has worked with all Indian Prime Ministers since 1947,  further says: "The MLAs are morally obliged to step aside to 'facilitate' a solution — something they have pledged. But almost proving the old phrase, 'Promises are made to be broken', our legislators have not done it so far. They should do it at the earliest. This is the moment of history — to make sacrifices. Mr Chief Minister, are you ready for it?" IANS