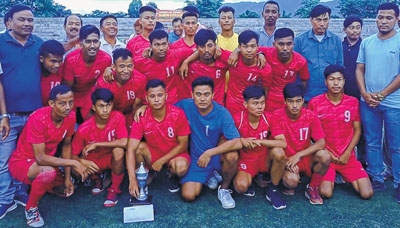 By Our Staff Reporter
IMPHAL, Sep 11 : Sekta Sporting Club (SSC) were crowned the champions of the Moirangthem Ibobi Memorial 1st Division League 2022 organised by Ad-hoc Committee of IEDFA with a 7 point finish after beating another title contender Pukhao Road Youth Association (PRYA), Khundrakpam 1-0 today at Artificial Turf Ground.
PRYA also finished with the same 7 points but the head to head result forced them to bite the dust and finish second in the 5-team league tournament.
The lone goal that proved decisive for the Sekta side was scored by W Ngouba in the 62nd minute after a barren first half.
Later in the day, NIVSO-Keibi rode on Sanathoi's double to sink CSC-Chanung 5-2 and secure fourth place in the league competition with 4 points from four matches.
NIVSO were leading 2-1 till the break via M Sanathoi's fourth minute goal and N Raju's 14th minute strike as Th Rabichandra scored for CSC in between the goals in the  7th minute.
After the break, H Sanathoi of NIVSO then made it 3-1 after 66 minutes before N Abhijit (66') and M Sanathoi (82') pumped in a goal apiece to complete the 5-1 thrashing.