Welcoming back the Cheetah 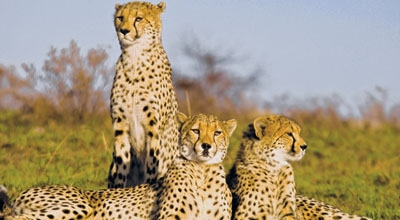 The countdown for the return of cheetah has begun and India cannot wait to welcome back the fastest land animal whose growls once echoed in forests across the country, barring the high mountains and coasts. On September 7 the cheetah came back to India and soon the cheetah would be criss-crossing the Kuno National Park in Madhya Pradesh.
The loss of cheetah from India is attributed to myriad reasons including large-scale capture of animals for coursing, bounty and sport hunting, extensive habitat conversion and a resultant shrinking of the prey base. All these factors induced by human action are symbolic of just one thing — an outright domination of the natural world by man. The reintroduction of cheetah into the wild is therefore a step towards correcting an ecological wrong and moving towards fulfilling our commitment towards Mission LiFE, a mantra given to the world by Prime Minister Narendra Modi. Mission LiFE aims to build a truly inclusive world where human greed does not overtake the need for survival of our flora and fauna and where humans exist in harmony with nature, including animals.
The western growth model led to the creation of an impression that human is supreme and powered by technology and this ‘supreme human’ can achieve whatever he sets out to claim as his. When this model was put to practice, humans lost and lost even as they temporarily gained the sense of prospering. This model has not just endangered several species but the very existence of Planet Earth. In India, for ages, we have believed (Nature protects if She is protected). The country lost just one large wild mammalian since our Independence.
We have been able to preserve several critical species and their ecosystems, including tigers, lions, Asiatic elephants, gharials and the one-horned rhinoceros, despite our population size and developmental needs. With Project Tiger, Project Lion and Project Elephant, India has over the last few years also been able to increase the populations of these critically important species.
While the tiger has served as a flagship and umbrella species of forest systems, the cheetah will fill the void for open forests, savannah and grasslands.The cheetah reintroduction is an ambitious step towards building a sustainable planet because reintroducing a top predator restores the historic evolutionary balance which goes on to have a cascading impact on restoration of their habitat and conservation of the prey base.The cheetah has been the evolutionary natural selection force which has led to the adaptation of high speed in species such as antelopes and gazelles. The return of the cheetah will ensure protection of its prey-base which includes threatened species and the open forest ecosystem, which too in some parts is on the verge of extinction.
The project cheetah will bring in resources to restore neglected habitats that in turn will conserve their biodiversity, harness their ecosystem services and their ability to sequester carbon to their maximum potential. The local communities also stand to gain enormously as ecotourism generated as a result of the curiosity and concern for the cheetah will give a boost to livelihood options for them and help improve their living conditions.
The world today as a whole has woken up to the need of preserving large carnivores and their ecosystems. Reintroduction and conservation/translocation are being used world over to halt or reverse the growing decline in numbers of the large carnivores. As India whole heartedly moves to fulfil its promise of building a sustainable future as a custodian of the planet for its future generations, it too has chosen to reintroduce the cheetah to reverse the decline of its ecosystem with return of cheetah as the top predator.
While the reintroduction is happening in Kuno, after a viable cheetah population is established, the cheetah could be considered for reintroduction in other States including Gujarat, Rajas-than, Karnataka and Andhra Pradesh. This would help in full restoration of the lost heritage of India along restoration of other wildlife forms and linked ecosystem. (The writer is Union Cabinet Minister for Environment, Forest & Climate Change; and Labour and Employment)