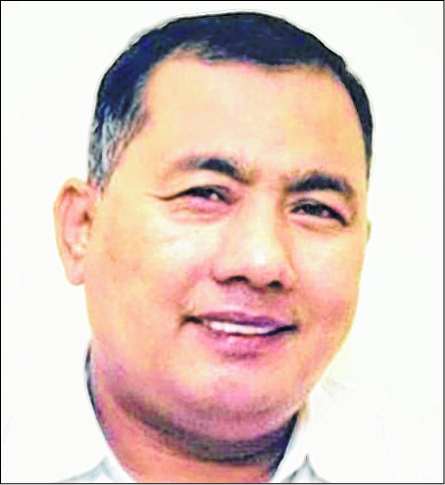 Laimayum Bashanta Sharma (Spokesperson, BJP Manipur Pradesh)
Contd from last Saturday
To provide food to the people during the lockdown in 2020 due to the Corona epidemic, the Modi Government brought the Pradhan Mantri Garib Kalyan Anna Yojana. In this scheme a 5 kg ration is given per person, free of cost per month. More than 80 crore people in the country got benefit from this scheme. This scheme was started under the Food Security Act. The Government has spent approximately Rs. 2.60 lakh crore so far and another Rs 80,000 crore was spent till September 2022 taking the total expenditure under PM-GKAY to nearly Rs. 3.40 lakh crore. This is the largest food security program in the world on record.
Roof for all scheme
7. Pradhan Mantri Awas Yojana (PMAY) : Pradhan Mantri Awas Yojana (PM Awas Yojana) was launched in 2015. The objective of this scheme is to construct 2 crore houses for the urban poor. Along with this, financial help is also given by the Government for building a house. Under this scheme, the subsidy is given in the interest of the home loan. Under this, every family gets a benefit of Rs 2.60 lakh. The amount and subsidy received under this scheme come directly into the bank account of the candidate, which is linked with the Aadhar card.
Universal life insurance for the common men
8. Pradhan Mantri Jeevan Jyoti and Suraksha Bima Yojana : Two insurance schemes were started by the Central Government. These schemes include Pradhan Mantri Suraksha Bima Yojna and Pradhan Mantri Jeevan Jyoti Bima Yojana (PM Jeevan Jyoti Bima Yojna). In the Pradhan Mantri Suraksha Bima Yojana, you can get a cover of up to Rs 2 lakh by paying a premium of just Rs 12 per annum. At the same time, you can get insurance of 2 lakh by paying Rs 436 annually under the Pradhan Mantri Jeevan Jyoti Bima Yojana.
Collateral free loan for Aam Aadmi
9. Pradhan Mantri Mudra Loan Scheme: Prime Minister Mudra Yojana (PM Mudra Loan Scheme) has completed 7 years. Under this scheme, loans up to Rs 10 lakh are given to people associated with non-corporate, non-farm, small, or micro-enterprises. This loan is given to start a personal business. Apart from this, a loan facility is also given under this scheme to increase business. There are Shishu, Kishor, and Tarun categories in which loans are given. Under the Shishu scheme up to 50 thousand rupees, under the Kishor scheme up to 5 lakh, and under the Tarun scheme, up to 5 to 10 lakh rupees are given. Mudra loans help new enterprises by providing collateral-free loans. It has been widely accepted that medium and small businesses in India contribute to economic growth. Thus the Modi Government encouraged and promoted this scheme which led to a 28 percent rise in self-employed jobs a few years back.
Girls empowerment
10. Sukanya Samriddhi Yojana : To enhance the Beti Bachao Beti Padhao (Save the girl child, educate the girl child) scheme which aims to educate citizens against gender bias and improve the efficacy of welfare services for girls, this scheme was launched to make the daughters of the country self-reliant and for their further progress, under the Beti Bachao-Beti Padhao campaign. Prime Minister Narendra Modi started the Sukanya Samriddhi Yojana in January 2015. The Government came up with the Sukanya Samriddhi Yojana to address the concerns of families who could not educate their children due to money, especially girls. By investing in it, you can add money for the expenses from the daughter's education to marriage. Under Sukanya Samriddhi Yojana, the account of daughters below the age of 10 years is opened in the name of their parents only. Under this scheme, the account can be opened by visiting the post office or bank. Sukanya Samriddhi Yojana matures in 21 years. However, the amount can be withdrawn from this account for studies after the girl's age is 18 years, but the full amount is available only after 21 years.
Youth Empowerment Schemes:
11. Pradhan Mantri Kaushal Vikas Yojana (PMKVY)
Skill India Mission was launched by the government in 2015 under which the flagship scheme Pradhan Mantri Kaushal Vikas Yojana (PMKVY) is run. It aims to train over 40 crore people in India in different skills by 2022. It aims at vocational training and certification of Indian youth for a better livelihood and respect in society. India has a demographic advantage like our arch-rival China. However, sans a skilled workforce, India cannot match China or replace China as the manufacturing hub of the world. The scheme will empower youth with employable skills by making over 300 skill courses available to them. It is one of the main pillars of Aatmanirbhar Bharat.
12. Agniveer Scheme
On June 15, the Government of India announced the Agnipath Scheme for the recruitment of youth in the Indian Armed Forces. I wouldn't go into details as information is available in the public domain. A highly disciplined and skilled soldier with 4 years of dedicated military service with Rs 11.5 lakhs in hand as a Seva Nidhi package which will be tax-free for these youths(age 17.5 to 21) when 75% of Agniveers will go back to society. India incorporated big guns have all welcomed these youths and have promised they will be given preference when selecting employees. Some of the Agniveers who are innovative could start their businesses or could pursue advanced studies to fulfill their dreams. Such a huge workforce of skilled and disciplined youths could act as a force multiplier for the Aatmanirbhar Bharat Abhiyan to achieve self-reliance.