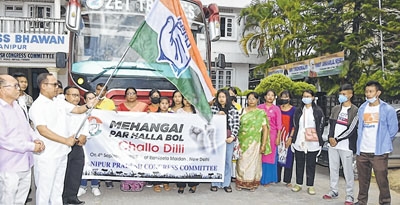 By Our Staff Reporter
IMPHAL, Sep 1 : MPCC president K Meghachandra today flagged off a 92-member team who would take part in a rally scheduled on September 4 at Ramlila Maidan, New Delhi against the escalating prices of commodities.
Speaking to media persons at Congress Bhavan here before flagging off the team, K Meghachandra said that Congress delegates coming from States of the country would assemble at Delhi and take out a huge rally.
He said that a 92-member team would leave Imphal by bus today and another team would leave for Delhi by flight tomorrow.
Meghachandra said that the common people are now suffering extreme misery on account of exorbitant taxes levied by the BJP Government on all essential commodities and imposition of much higher GST on petroleum products including LPG.
The BJP Government has been imposing very high taxes on agricultural equipment as well as agricultural produces.
Milk products meant for children which were earlier exempted from taxes are now charged a tax of 5 per cent. Moreover, taxes levied on stationery items and handloom products have been hiked manifold thereby pushing all the people to a very difficult situation, the MPCC president said.
Another rally which would highlight the escalating prices of goods, rising unemployment and BJP’s brand of politics which cares nothing but winning elections would be flagged off by Congress leader Rahul Gandhi on September 7.
The rally would be flagged off from Kanyakumari, Tamil Nadu and wrap up at Kashmir.
To a query raised by reporters, the MPCC president asserted that the BJP-led Government has failed to accomplish its 100 days action plan.
The Government has neither achieved any infrastructural development nor has it succeeded to fulfil its election promise of giving jobs to 1.5 lakh people in a year, Meghachandra remarked.
He pointed out that the BJP-led Government is still unable to announce the results of the recruitment exams to two IRB battalions.
The severance of ties between BJP and JD-U in Bihar has testified that the ‘double engine’ has collapsed, he said.
He claimed that many other partners of NDA would walk away from BJP before the Lok Sabha election of 2024.
He then appealed to all the people to think twice before casting votes in future elections including local body elections.
He urged all the voters to exercise their right to adult franchise after analysing the  differences between the previous Congress Government and the incumbent BJP-led Government.