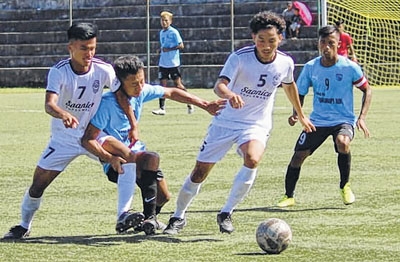 By Our Staff Reporter
IMPHAL, Sep 19 : Hemam Samson scored twice to ensure All Moirang Football Association (AMOFA) edged past 10-man Angtha FC 2-1 as Football 4 Change (F4C) Academy registered a 2-0 win over J Songtun Youth Club (JSYC) in the ongoing 2nd AMFA Cup 2022-23.
In the 10th match of the tournament (Group A), AMOFA who played out a 4-4 stalemate with JSYC in their opening encounter started slowly and rode on Hemam Samson goal in the 37th minute to enter into the break with a slender 1-0 lead at Artificial Turf Ground, Khuman Lampak.
After the restart, the impetus remained with the Moirang team and it was Hemam Samson again who found the target in the 49th minute to double the advantage for his team.
Angtha FC however managed to pull back a goal in the 52nd minute thanks to Sorokhaibam Kaphoi's goal. Their comeback effort however suffered a jolt as Moirangthem Somokanta was sent off in the 66th minute reducing them to 10-man.
Despite numerical superiority, AMOFA failed to hold sway over their Angtha rivals and add more goals to their tally.
Later in the day, F4C Academy scored a goal each side of the break to carve out a 2-0 win over JSYC.
F4C Academy went ahead after 24 minutes with Abelson Jachi goal following a series of unsuccessful runs and the last goal came up two minutes into the stoppage time (90+2') with Mangminlun stunning the JSYC keeper.