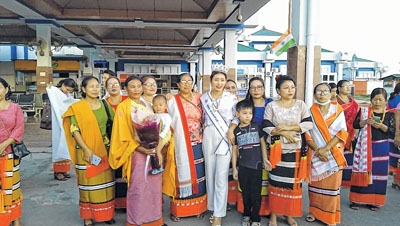 By Our Staff Reporter
IMPHAL, Sep 20: AR Jebina who has been recently awarded the Mrs Manipur G-1 Winner Title by the Forever Star India at Jaipur was accorded a warm welcome by All Inpui Students’ Union, Inpui Naga Women’s Union people and Inpui Students’ Union at Imphal International Airport today.
Speaking to media persons at the sideline of the reception, AR Jebina claimed that she had been initially crowned the City Winner title before the crowning of Mrs Manipur G-1 Winner by the Forever Star India at the second phase of the beauty show in a grand event held at Jaipur.
She went on to inform that the models who have been crowned the State level Mrs Title will take part in the grand finale of the National level beauty show which will be conducted by Forever Star India. Saying that she was elated in receiving the State level Mrs title, Jebina sought blessings from the people of the State for  success in the grand finale.