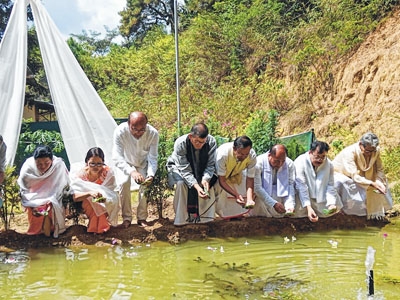 By Our Staff Reporter
IMPHAL, Sep 20: 'Langban Heisoi Katpa' ritual was performed today at Ibudhou Marjing complex at Heingang to pay tribute and offerings to the departed artists of different artforms.
The ritual was organised by Theatre Centre Manipur in association with the North Eastern Theatre Association (NETA), Heingang.
Padmashree awardee Wareppa Naba, president of Theatre Centre Manipur; M Shyamkishore, president NETA; L Kishorjit, Director Art and Culture; P Bimola Devi, Adhyaksha, Imphal East Zilla Parishad; S Liben of National OBC Morcha; Sarungbam Beeren, Director of Manipur Theatre Academy and Budha Chingtham, chairman CWAF have graced the occasion as presidium members among others.
Speaking at the occasion, Padmashree awardee Wareppa Naba had categorically stated that Manipur has been able to hold a special place on the global platform in art and culture owing to the efforts of the forefathers of the State who have  left behind a rich cultural and traditional heritage.
He further stressed on the need of making cohesive efforts to safeguard the indigenous culture and traditions adhering to the norms followed by the forefathers.
Therefore the youths of today should research on the various aspects of such traditions to ensure that the same is carried forth to future generations, he added.