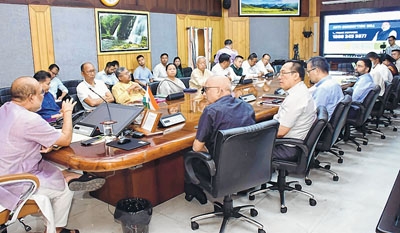 Imphal,  Sep 19 (DIPR)
Chief Minister N Biren Singh launched ‘CM Da Haisi’ web portal at the Chief Minister’s Secretariat today. The web portal has been developed to receive complaints and grievances from the public.
Public can raise their grievances through the web portal by logging on to www.cmdahaisi.mn.gov.in and the complainants can also check the status of their complaints. The Public Grievances Redressal and Anti-Corruption Cell will use the portal to liaise with the department concerned to redress the grievances of the public within a stipulated time and also provide the actionable complaints to the State Vigilance and Anti-Corruption Department for further enquiry and investigation.
Speaking at the occasion, N Biren stated that gaining public trust and confidence is very important to run a Government and take up various development works. As such, all the Government officials should perform their duties with dedication and with transparency, as transparency follows development, he added.
Mentioning that corruption is the main concern which hinders development of the State, he continued that the web portal has been launched with the objective to totally root out corruption from public offices and enhance public service delivery in the State.
Expressing satisfaction with certain feedbacks given by the public regarding effective redressal of their grievances through CM Da Haisi platform, the Chief Minister stated that CM Da Haisi had become an effective platform for rooting out corruption from the State.
Giving credit to all bureaucrats of the State for the development achieved so far and bringing a good image of the State, Biren called for joint efforts to end corruption totally in the State.
It may be mentioned that the Anti-Corruption Cell in the Office of the Chief Minister was re-constituted as Public Grievance Redressal and Anti-Corruption Cell on March 23, 2022 and a Secretary rank officer was appointed as in-charge of the cell. So far, a total of 134 complaints have been received by the Public Grievance Redressal and Anti-Corruption Cell. Out of which 85 per cent of the complaints have been resolved and communicated to the complainants.
Earlier, complaints related to public grievance and corruption cases were received through letters, email ([email protected]), toll free number (Anti-corruption)-18003453877, 9534795347, WhatsApp No. (9402150000 for Anti-Corruption & 9534795347 for Public Grievances).
The launching programme was attended by Power Minister Thongam Biswajit, Rural Development and Panchayati Raj Minister Yumnam Khemchand, Works Minister Govindas Konthoujam, Textiles, Commerce and Industries Minister Nemcha Kipgen, Water Resources Minister Awangbow Newmai, Health Minister Dr Sapam Ranjan, CAF & PD Minister L Susindro, Social Welfare Minister Heikham Dingo, Transport Minister Khashim Vashum, Chief Secretary Dr Rajesh Kumar, Administrative Secretaries and Government officials, among others.