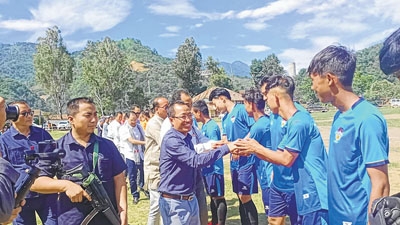 Our Correspondent
NONEY, Sep 19 : The 13th Alpha & Omega Gospel knock-out Football Tournament kicked-off today at Longmai common ground Noney district HQs. The tournament is being organised by Alpha & Omega Sports Ministry, under the Theme "Rising Tomorrow's Champion"
The formal opening ceremony programme was held at Multipurpose Hall, Longmai -3 in the presence of Dinganglung Gangmei, MLA Nungba AC and Chairman HAC as chief guest;  Joseph Pauline, Deputy Commissioner Noney as guest of honour  and Napolean Rongmei, MFS DFO, Noney Forest Division; Namsadai Piter, Addl SP, Noney; Rev G Adim chairman LCF and Stody Dangmei, proprietor, M/S Gaidingam Service Station as special invitees.
The opening ceremony began with a prayer by Rev G Adim and was followed by a welcome note by Theophilus Gangmei, Missionary to Cambodia, founder Alpha & Omega Sports.
Speaking at the occasion, the chief guest noted that Manipur is regarded as the power house of sports in India because of the noteworthy players and their exemplary performances at the National and international level competitions.
He however expressed regret over the uneven distribution of sports facilities across the State. He said that Noney district lacks standard football fields and other infrastructure as installed in other districts like Imphal and some hill districts.
Maintaining that common playground of Longmai Area situated at Longmai Part-3 is the only ground to have received a nod for development into an international standard football ground and the work will be started soon. A turf ground with swimming pool facility will also be constructed within this year, he informed while extending his best wishes to all participants ahead of the tournament.
Other speakers also stressed on the importance of games and sports in one's life and to the society.
17 teams from different Villages under Noney district are taking part in this tournament. In the opening match, Rangkhung-1 thumped Alpha & Omega team by 3-1 goals.
The second match saw The Youngster Pungmon registering a huge 6-0 win over Rangkhung-3.