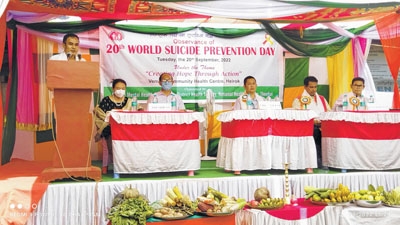 THOUBAL, Sep 20 (DIO)
The District Mental  Health Program, District Health Society and National Health Mission Thoubal today organised 20th World Suicide Prevention Day at Community Health Center Heirok.
It may be mentioned that World Suicide Prevention Day is observed every year on September 10. The theme of this year's observation is 'Creating Hope through Action'.
A Subhash Singh, IAS, Deputy Commissioner, Thoubal was the chief guest of the function.
Speaking at the function, the Deputy Commissioner said that nowadays children and adolescents are burdened with immense pressure from their parents.
"One must avoid putting pressure on their children as it leads to depression and other mental problems. It adversely affects the personality of the child when they grow up and reach adulthood", he said.
He further added that earlier children used to play in the open playground which was an opportunity to mingle with friends and people in the neighbourhood. However due to urbanization, such outdoor activities are now slowly fading away.
The DC appealed to the parents and guardians to actively socialize their children for them to mingle with friends, relatives and other elders for proper personality development of the child.
Speaking at the function, Dr Y Nokul, CMO Thoubal said that suicide is becoming a big health problem in the State.
Highlighting the high cases of suicide attempts, he stated that in order to avoid such cases various programs of mental health are being undertaken. He also appealed to the youth and  parents to reach out and seek the help of medical professionals.
The program was attended by Dr Aarti Sougaijam MO in-charge CHC Heirok and Th Nimai, principal, Heirok Higher Secondary School.