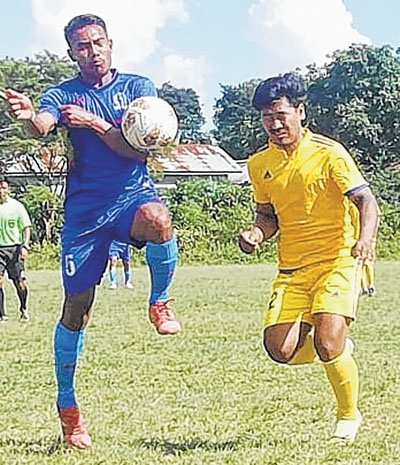 By Our Staff Reporter
IMPHAL, Sep 20 : NGYDC-Ngakchoupokpi overwhelmed LYVO-Chothe 4-0 as Loktak FC clinched a 3-1 win over GDC-Thinungei in today's matches of the ongoing 16th N Balananda Singh Memorial 2nd Division Football League 2022-23 at Mini Stadium Bishnupur.
NGYDC who played out a goalless draw with Loktak FC in the previous match dominated the game from the word go and led the first half 2-0 before completing the 4-0 rout of LYVO.
It was T Biju who opened the scoring in the 23rd minute and M Boy doubled the advantage in the 36th minute. H Roshan then took charge of NGYDC attack in the second half and slotted home twice (50', 77') to hand his team a huge victory.
Later in the fifth match, Loktak FC also opened their winning account with a 3-1 beating of GDC.
Kh Jebison netted the opener in the 13th minute before L Athang Kom made it 2-0 before the break with a 37th minute strike.
Loktak FC continued to press their Thinungei rivals hard after the break as well and went 3-0 up with Gangku Gangmei scoring the team's third in the 44th minute.
They could have gone home with a bigger win but conceded an own goal in the 67th minute as Bishal Paul fumbled to put into his own net. Eventually the game ended 3-1.