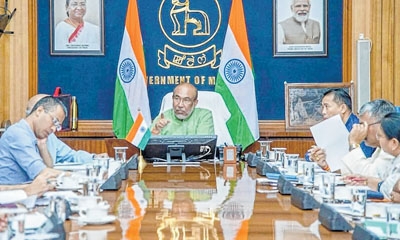 By Our Staff Reporter
IMPHAL, Sep 20: The State Cabinet today took a bold decision to lift prohibition on liquor partially and also to regulate brewing, sale and consumption of liquor in the State.
Prohibition was enforced in the entire State of Manipur on April 1, 1991 during the time of Chief Minister RK Ranbir.
A Cabinet meeting presided by Chief Minister N Biren was held at the Chief Minister’s Secretariat at 10.30 am today.
Briefing media persons after the Cabinet meeting at his Secretariat South Block office, Horticulture and Soil Conservation Minister Letpao Haokip informed that the State Cabinet resolved to lift the prohibition partially considering the health concerns of the public.
The State Cabinet did not take the decision by considering the revenue or income alone which would be earned from legalising liquor. It was primarily health concerns which nudged the Cabinet to lift prohibition, Letpao said.
After the promulgation of the Manipur Liquor Prohibition Act 1991, brewing, sale and consumption of liquor were banned in the State with the exception for some ST and SC communities who have been brewing liquor for traditional and cultural purposes.
However, despite the ban, brewing and consumption of liquor could not be controlled effectively.
On the other hand, consumption of spurious liquor has been posing serious threat to public health and life, and it has adverse impacts on the State’s economy, Letpao Haokip said.
The State Cabinet resolved to lift the prohibition after considering all these facts.
He informed that a Cabinet sub-committee recently went to Goa and studied how liquor was brewed there.
Letpao said that sale and consumption of liquor would be permitted in greater Imphal areas and other district headquarters.
Moreover, hotels and restaurants which have not less than 20 beds would be allowed to serve liquor, he said.
Liquor brewed in Manipur would be exported outside the State. The Cabinet sub-committee who went to Goa recently took some samples of local liquor. On being tested there, the samples were found containing 41.90 per cent alcohol.
The alcohol percentage would be reduced to the standard 40 per cent and liquors brewed in the State would be exported after the bottles/containers are embossed with the label ‘Not for sale in Manipur’, he informed.
But the entire process of brewing and selling alcohol should be done only after obtaining due permission from the Excise Department. Lifting of the prohibition does not mean there would be no restriction at all, Letpao said.
The Cabinet meeting also adopted another decision to extend the disturbed area status of Manipur by another year. But the extension would not cover the jurisdictions of 15 police stations from where AFSPA 1958 has been already withdrawn, he informed.
Notably, disturbed area status was lifted from areas covered by Imphal police station, City police station, Singjamei police station, Porompat police station and Heingang police station in 2004. Thus AFSPA was withdrawn from these places.
Further, AFSPA was withdrawn from the area covered by Sekmai police station, Lamsang police station and Patsoi police station in Imphal West district, Lamlai police station and Irilbung police station in Imphal East district, Bishnupur police station, Kakching police station, Thoubal police station and Jiribam police station on April 1 this year.
The State Cabinet gave its consent prorogue the second session of the 12th Manipur Legislative Assembly.
The Cabinet meeting also approved the New Manipur Industrial and Investment Policy.
The Cabinet meeting also agreed to given one time relaxation with regard to the service rules of MCS, MPS and MFS officers, Letpao conveyed.
Meanwhile, another source informed that the Cabinet meeting agreed to recruit one MBA, one civil engineer, one mechanical engineer, 25 computer operators, 10 LDCs and 10 multi tasking staff regarding the State Government’s plan to procure paddy from the farmers of the State.