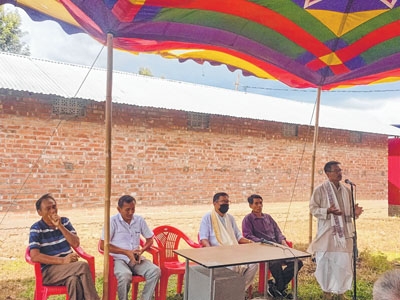 By Our Staff Reporter
IMPHAL, Sep 21 : The Loumee Shinmee Apunba Lup (LOUSAL) has asserted that the proposed plan to construct a ring road around Imphal city will affect more than 500 paris of paddy field and appealed the Government to consider bridges in place of the ring road.
Mutum Churamani, president LOUSAL, said this during Loumee Numit observation at Pungdongbam in Imphal East district today and added that the Government is planning to construct a ring road which will pass through paddy fields at Khurai Angom Leikai, Heingang, Kakwa etc.
Despite the Government claims that only about 250 paris of paddy field will be affected by the ring road, another 250 paris on each side of the ring road will be left uncultivable, Churamani added.
Adding that the policy will harm the farmers and make a huge dent in rice production in the State, Churamani appealed the Government to consider making more overbridges to ease the traffic congestion in Imphal. Churamani added that protection of cultivable lands is the duty of all the indigenous people and that LOUSAL has been playing an important role in preservation and protection of cultivable land. However some powerful and moneyed class of people have been standing in their way, he alleged.
He added that despite increasing import of Urea, there is still a shortage of Urea amongst the farmers and expressed suspicion if the Urea meant for the farmers are being diverted for poppy plantation in the hill areas.
The programme was also attended by N Boro, advisor LOUSAL; Ch Devchandra, former convenor LOUSAL; former president of LOUSAL Angom Rabi and Nachou ZP member Thiyam Dilip Meitei.