NSCN (IM) ‘not happy’ with Interlocutor... But agrees to talks after Amit Shah, Himanta intervention 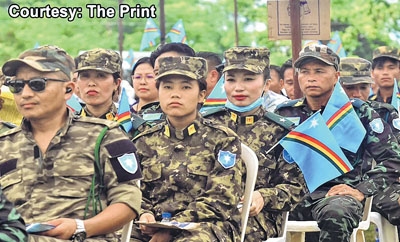 Guwahati, Sep 20 (The Print)
Naga rebels of the NSCN (IM) have agreed to resume peace talks this week with the Central Government following a series of meetings involving Naga political leaders, Assam Chief Minister Himanta Biswa Sarma and Union Home Minister Amit Shah.
But the rebels are now said to be unhappy with Interlocutor AK Mishra, and this has become a point of contention.
The talks are to be based on the Framework Agreement signed on 3 August, 2015.
The 22-member Core Committee on the Naga Political Issue, which had met Shah and Sarma, includes Nagaland Chief Minister Neiphiu Rio and Deputy Chief Minister Y Patton.
“Whatever has been conveyed to us [by the Home Minister], we have conveyed to them [NSCN-IM],” TR Zeliang, co-convenor of the committee and chairman of the ruling United Democratic Alliance in Nagaland, told reporters Saturday. He added that the NSCN (IM) had conveyed that they had been unhappy with Mishra.
“Their point of contention was that they are not happy with the Interlocutor, because he has omitted some of the political, important points,” Zeliang said.
Speaking to ThePrint on condition of anonymity, a source in the NSCN (IM) told ThePrint, “We are keen to define the Framework Agreement, but Mishra said that if we define it, it will take a long time.”
The source added that Mishra wasn’t keen on going over whatever was discussed with the previous Interlocutor, RN Ravi.
In April this year, Mishra had held five rounds of informal and formal talks with Thuingaleng Muivah, the general secretary of the rebel outfit.
The NSCN (IM) source added that a team has now reached Delhi to resume dialogue.
Framework Agreement and its problems
The Framework Agreement between the Centre and the NSCN (IM) was signed in 2015 to end the decades-old insurgency in Nagaland.
It was centred on the demand for a greater Nagaland or ‘Nagalim’ — a sovereign ethnic homeland, comprising the State and Naga-inhabited areas of Assam, Manipur, Arunachal Pradesh and Myanmar.
“Both sides have understood each other’s respective positions and are cognizant of the universal principle that in a democracy, sovereignty lies with the people… It is a matter of great satisfaction that dialogue between the Government of India and the NSCN has successfully concluded and we are confident,” said the agreement.
The agreement further said that “it will provide for an enduring inclusive new relationship of peaceful co-existence of the two entities”.
The interpretation of the agreement has become a hurdle with the NSCN (IM) interpreting phrases like “shared sovereignty” to mean that the Nagas are different and should remain so. They argue that their “sovereignty” must be retained.
When asked if the Union Government had agreed to define the Framework Agreement, the NSCN (IM) source said, “For us, two entities means that we are not Indians…if they want to discuss the solution on the basis of the agreement that means they will have to define it.”
According to news reports, the Central Government team had been working on a new set of “formulation papers” for packaging a set of offers, along with the old.
Earlier in the day, the ABP with inputs from news agencies had reported that a seven-member envoy from the National Socialist Council of Nagalim (NSCN-IMIsak-Muivah )'s group, led by the collective leadership representatives, is scheduled to meet with Union Home Ministry officials in New Delhi on Tuesday to try to resolve obstacles in Naga peace negotiations.
The meeting may possibly include AK Mishra, the Centre's envoy for the Naga peace negotiations. On Monday, the NSCN (IM) team travelled from Nagaland's Dimapur to Delhi.
Since May, talks between the Centre and the National Socialist Council of Nagalim-Isak Muivah (NSCN-IM) have halted.
On Saturday, members of the core committee and delegates from the NSCN-IM met for two hours in Chumoukedima.
The conference was called after the Centre ordered the core panel, led by Chief Minister Neiphiu Rio, to persuade the organisation to continue peace negotiations and reach a final agreement, PTI reported.
Since 1997, the Union Government has held two different talks with the NSCN (IM) and the Naga National Political Groups (NNPGs), which include seven organisations.
On August 3, 2015, the Centre inked a Framework Agreement with the NSCN (IM), and in December 2017, it reached an agreement with NNPGs.
“They are not happy with Interlocutor AK Mishra over the omission of some of the politically important points, which were included in the formulation paper submitted by former Interlocutor RN Ravi," Nagaland’s United Democratic Alliance Chairman TR Zeliang was quoted by PTI in its report.
According to the UDA chairman, the NSCN (IM) notified the core committee that it would begin peace negotiations provided "it is based on the Framework Agreement and formulation documents submitted by Ravi and the Centre's current Interlocutor AK Mishra."
The core committee's function as a facilitator, according to Zeliang, remains unaltered.
“Things are working out and we hope that the talks will resume very soon,” he said.
Rh Raising, a member of the NSCN (IM) leadership, informed reporters that the organization's team will soon depart for Delhi to begin talks with the Government.
The framework deal negotiated by the Centre and the NSCN (IM) occurred after more than 80 rounds of discussions since a ceasefire accord was inked in 1997, following decades of insurgency in Nagaland, which began shortly after independence in 1947.
However, the ultimate solution has yet to be implemented. The NSCN (IM)'s insistence on a distinct Flag and Constitution for the Nagas has caused a delay in reaching a definitive agreement.  ABP (With Inputs From Agencies)