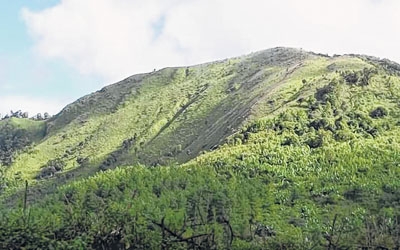 Mungchan Zimik
Ukhrul, Sep 20 : A plan has reportedly been devised to promote tourism at Khangkhui Khullen in Ukhrul which is endowed with picturesque landscape and rich flora and fauna by developing all the potential areas in the village.
Khangkhui Khullen has all the potential to be promoted as a war tourism and eco-tourism destination  as the the first battle of Allied Force and Japanese Army was fought here at Mount Harva Khangai in March 11, 1944, said Khangkhui Khullen Tourism Development Organisation ( KKTDO) chairman Sami Agnatius during an interaction with this correspondent.
One of the popular tourist spots popular among the tourists is the limestone cave (Khangkhui Mangsor) which is surrounded by admirable and scenic beauty.
There is also a collection of military equipment and trenches used during the war in  the village.
Adjacent to Harva Khangai is Mount Khorung and the latter is majestically clad with Huya won (Kaempferia) during July and August while Rhododendron blooms during dry season and it revitalizes the weary travellers, said Sami.
The place is also home to orchids of various kinds, wild animals and transit point for migratory bird Shiri (grey sided thrush) while a stream that runs through the mountain provides perennial water to the village.
He further elaborated that there is a perfect site for trekking just a few hundred metres ahead on the eastern side of Khangkhui Cave.
Sami maintained that there is also high demand for the fish being produced from the village in the market for its taste.
The KKTDO chairman also stated that the State Government in order to develop tourism in the village sanctioned funds for construction of a tourist lodge, community hall, gate and improvement of Mangsor Cave.
He also appealed to the State Government to construct a war memorial at Harva Khangai and a mini museum to showcase war artefacts. According to the village authority, at least 600 people visited the village in a day to see the limestone cave  during the Shirui Lily festival.
The road stretch connecting NH-102 via Khangkhui Village to Imphal-Kamjong road at Nungshang junction, however,  is extremely narrow besides its poor quality and it inconveniences the tourists in visiting the village, he pointed out, urging the Government to repair the road stretch.