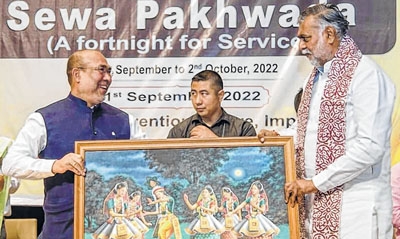 By Our Staff Reporter
IMPHAL, Sep 21: Chief Minister N Biren Singh has categorically stated that Indians living abroad now take pride in being a Hindu and an Indian since the premiership of Prime Minister Narendra Modi began in 2014.
The Chief Minister made the remark during a discussion programme on a book entitled [email protected]: Dreams Meet Delivery held at City Convention Centre as a part of Sewa Pakhwada.
Sewa Pakhwada is being organised throughout the country to celebrate the 72nd birthday of Prime Minister Narendra Modi.
The programme was also attended by Union Minister of State for Food Processing and Jal Shakti Prahlad Singh Patel; Union Minister of State for External Affairs  Dr RK Ranjan Singh; BJP State unit president A Sarda Devi;  party Ministers, MLAs, Vice Chancellors of Manipur University, Central Agricultural University and Manipur University of Culture among others.
[email protected]: Dreams Meet Delivery was released by former Vice President M Venkaiah Naidu on May 11, 2022 at Delhi. This book is  a compilation of 21 chapters authored by 21 eminent intellectuals and it highlights the influence of Prime Minister Narendra Modi on the country.
At the event, N Biren continued that the programme was held to analyse and understand the political journey of Prime Minister Narendra Modi from becoming the Chief Minister of Gujarat to becoming the Prime Minister of the Nation.
He also claimed that Prime Minister Narendra Modi is a Godlike figure as he didn't take a leave for a day in his political journey spanning over 20 years.
Continuing that the influence of the Prime Minister continues to grow with each passing day, N Biren reiterated that Indians living abroad now have a sense of pride of being an Indian since Prime Minister Narendra Modi came to power in 2014.
He also said that the economy of the country is progressing under the dynamic leadership of Naren- dra Modi.
Allotting Ministerial posts to 11 women and appointing A Sarda as the president of BJP Manipur Pradesh is a clear evidence that the Prime Minister lays emphasis on women empowerment, Biren said and maintained that the BJP Government has also deposited Rs 50 crore to bank accounts of women of the Nation, apart from providing LPG connections to many other women.
The Chief Minister further stated that the BJP has been able to reduce instances of corruption by implementing One Nation One Ration Card scheme to give the benefits of Government schemes directly to the beneficiaries.
N Biren then urged all the Ministers, MLAs and members of BJP to strive for further growth of BJP and build a better Manipur and the country at large.