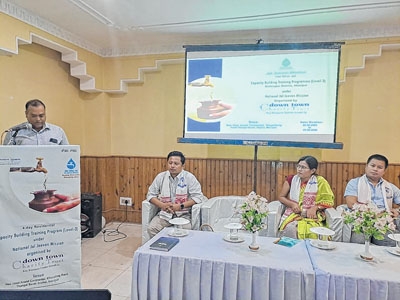 IMPHAL, Sep 22
A 4-day 'Residential Capacity Building Training Program' under the aegis of the Ministry of Jal Shakti for the trainees of Bishnupur district commenced today at New Hotel Anand Continental.
The training program is being organised by Assam Downtown Charity Trust which has been empanelled by the Ministry of Jal Shakti, Department of Drinking Water and Sanitation, Govt of India as Key Resource Centre (KRC) for imparting capacity building training programs at community level in all the 8 States of Northeast India.
The inaugural function was graced by Kh Leena Devi, Jal Jeevan Mission Manipur (Capacity Building) Director; Rajkumar Somio, State Nodal Officer JJM; Ramboji, Executive Engineer PHED Bishnupur and Bishken Mutum, State Consultant, Swachh Bharat Mission Gramin Manipur as the presidium members among others.
65 trainees including pradhans, PRI members, village leaders and local club representatives of Bishnupur district are participating in the training program.
Speaking at the occasion, Kh Leena Devi had stated that the activities of Jal Jeevan Mission are being taken up properly in the State.
She further stressed on the role of village community leaders, elected  members of local bodies and villagers for the effective implementation of the Mission which aims at providing drinking water to every rural household in the country.
She also expressed contentment to see the active participation of the above people in these training programmes.