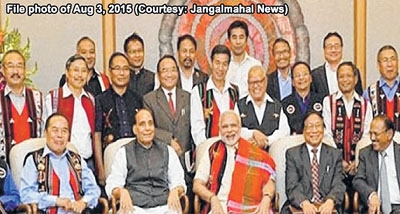 NEW DELHI, Sep 21
Centre’s emissary for Naga peace talks and former Additional Director of Intelligence Bureau, AK Mishra, on Tuesday held an informal meeting with Isak-Muivah faction of National Socialist Council of Nagalim (NSCN-IM) in New Delhi to break the stalemate over the decades-old Naga political problem, people familiar with the matter said.
Official talks between the Union Government and the Naga outfit are likely to be held in the next few days. The outfit has reportedly expressed their desire to meet Union Home Minister Amit Shah to discuss the matter, the people added.
A seven-member delegation of NSCN (IM), the largest Naga rebel group, is currently on a visit to the National capital to resume the peace talks which were halted due to lack of consensus on a few core issues, particularly over the recognition of the Naga Flag and Constitution.
NSCN (IM) leaders remained unavailable for comments.
The outfit, meanwhile, said the time has come for Prime Minister Narendra Modi to meet the Naga people’s aspirations as per the August 2015 Framework Agreement (FA) signed between the Centre and NSCN (IM).
In an editorial in its monthly bulletin which was released on Tuesday, the NSCN (IM) recalled how seven years ago, Modi generated hope by announcing that “he has solved the longest insurgency movement in Southeast Asia”.
The Prime Minister had declared the day as one that marks the beginning of a new age, it said.
“The credit he (PM Modi) has taken in bringing about FA should be unerringly interpreted to take forward in solving the Naga issue. The stand of the NSCN on FA has been distinctly stated time and again..... The unifying principle of One People One Nation symbolised by the God given Naga Nation Flag is non-negotiable in the name of Naga political solution,” the editorial said.
ABP news had on September 20 reported that a seven-member envoy from the National Socialist Council of Nagalim (NSCN-IM)'s group, led by the collective leadership representatives, is scheduled to meet with Union Home Ministry officials in New Delhi on Tuesday to try to resolve obstacles in Naga peace negotiations.
The meeting may possibly include AK Mishra, the Centre's envoy for the Naga peace negotiations. On Monday, the NSCN (IM) team travelled from Nagaland's Dimapur to Delhi.
Since May, talks between the Centre and the National Socialist Council of Nagalim-Isak Muivah (NSCN-IM) have halted.
On Saturday, members of the core committee and delegates from the NSCN (IM) met for two hours in Chumoukedima.
The conference was called after the Centre ordered the core panel, led by Chief Minister Neiphiu Rio, to persuade the organisation to continue peace negotiations and reach a final agreement, PTI reported.
Since 1997, the Union Government has held two different talks with the NSCN (IM) and the Naga National Political Groups (NNPGs), which include seven organisations.
On August 3, 2015, the Centre inked a Framework Agreement with the NSCN (IM), and in December 2017, it reached an agreement with NNPGs.
According to the UDA chairman TR Zeliang, the NSCN (IM) notified the core committee that it would begin peace negotiations provided "it is based on the Framework Agreement and formulation documents submitted by Ravi and the Centre's current Interlocutor AK Mishra."
The core committee's function as a facilitator, according to Zeliang, remains unaltered.
Hindustan Times and Staff Reporter