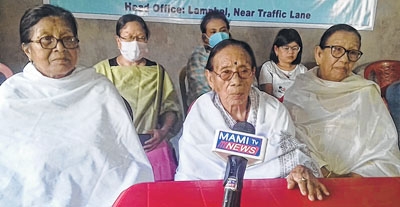 By Our Staff Reporter
IMPHAL, Sep 22 : Coming down heavily on the State Government for lifting prohibition, the All Manipur Women's Social Reformation and Development Samaj (Nupi Samaj) has said that the mothers will launch a movement more aggressive  than that of June 18 if the Government fails to cancel the Cabinet decision taken on September 20 at the earliest.
Speaking to media persons at Lamphelpat today, Nupi Samaj president Thokchom Ramani said it would be wrong to assume that the people have agreed to lift prohibition as the public and stakeholders concerned were never consulted before decision was taken by the Cabinet.
Saying that many have started approaching Nupi Samaj to oppose the move of the Government collectively, Ramani accused the State Government of taking the woes of the mothers lightly.
The 93 years old activist also asked if the Government can ensure  the wellbeing of the people and save lives by collecting revenue from liquor.
"It was silly and immature for the Government to lift prohibition as alcoholism and drug menace are still a serious problem of the State," she added.
Saying that women have been bearing the brunt of alcoholism since the past few decades due to rise in domestic violence and untimely deaths of their spouses, she added that the Nupi Samaj will never accept the decision taken by the Cabinet.
She then urged the Government to revoke the decision at the earliest to prevent unrest in the State.
The Cabinet partially lifted the Manipur Liquor Prohibition Act, 1991 which was in force for about 31 years on Tuesday to regulate the sale and brewing of liquor.
Coalition Against Drugs and Alcohol (CADA) has also voiced its opposition to the initiative of the State Government to lift prohibition and allow sale and brewing of alcohol.