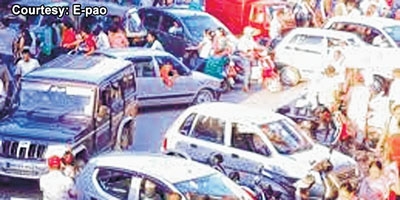 By Our Staff Reporter
IMPHAL, Sep 22 : In view of the rising traffic volume and increasing number of vehices which create traffic jams and related issues in Imphal City frequently, the All India Radio (AIR) Imphal has started a new initiative to broadcast live traffic report from today onwards.
The initiative was taken up by collaborating with the Traffic Control Police Wing to lessen traffic chaos and ensure smooth movement for the  commuters and road users, said a statement issued by AIR, Imphal.
The initiative was launched with a brief message from DGP P Doungel.
The inaugural live traffic report was presented on FM Sangai Channel (103.5 MHz) immediately after the DGP's message, said AIR, Imphal and maintained that the traffic report would be available on specific time slots on FM Sangai Channel.
It also said that an inaugural function was organised at AIR, Imphal today in the presence of DGP P Doungel.