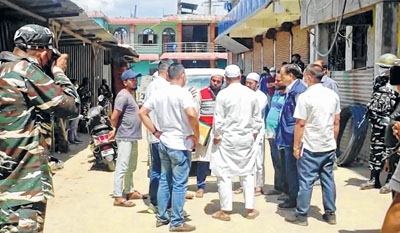 By Our Staff Reporter
IMPHAL, Sep 22: The National Investigation Agency (NIA) carried out an intensive raid at the office of Popular Front of India (PFI), Manipur branch located at Lilong Masjid road this morning.
The NIA team was assisted by Thoubal commandos and CRPF, and the raid which started at around 3.30 am went on till noon.
PFI Manipur unit president Moulana Abdullah Hussainy and general secretary Md Raffijuddin Shah of Lilong Turel Ahanbi were called up to their office during the raid.
The raid was conducted under the command of SP NIA Imphal Branch in coordination with the NIA headquarters, New Delhi.
Even though the president came to the office, the general secretary did not come to the office. Subsequently, a team of NIA went to his residence and brought him to their office, sources informed.
As the raid was going on at the office complex, both of them were taken to their respective houses and their houses were also searched by NIA sleuths.
Meanwhile, local people of Irong staged a protest demonstration against the house search. Nonetheless, police managed to keep the situation under control.
Later, people residing near the PFI office also staged a protest demonstration against the raid. The protesters were controlled by additional police force and CRPF while NIA continued the raid.
The NIA sealed the office building after they concluded their raid at around noon.
Sources said that some documents were seized by the NIA team from the PFI Manipur branch office.
Later, speaking to the media persons, Moulana Abdullah Hussainy, president of PFI Manipur branch said that the search carried out by the NIA was very peaceful and went on in orderly manner
He said that they extended full cooperation to the NIA and added that they are ready go to the NIA office, if required.
He also confirmed that NIA team had taken away several documents including passbooks of bank accounts and some mobile phones.
NIA team also issued a memo of the seized items.
Moulana Abdullah Hussainy said that nothing objectionable was found during the raid.
Notably, NIA conducted raids at multiple locations in Telengana and Andra Pradesh against the cadres of PFI in Nizamabad on September 18.
During the raids carried out at 38 locations in Telangana in connection with a case relating to Abdul Khader of Nizamabad, the NIA team seized incriminating materials  including digital devices, documents and more than Rs 8 lakh in cash.
It was reported that the alleged accused persons in the case organized camps for imparting training to commit terrorist acts and promote enmity between different groups on the basis of religion.