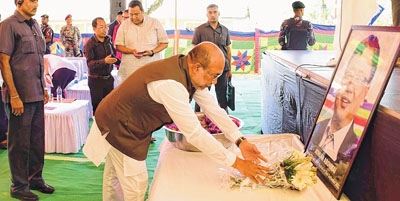 Imphal, Sep 22 (DIPR)
Chief Minister N Biren Singh made a clarion call to all communities for peaceful co-existence, cooperation and unity, and stated that Manipur’s beauty lies in its diversity.
The Chief Minister was addressing a gathering at the first death anniversary of (L) Athuan Abonmai at Tarung village, Langol, today.
N Biren assured that justice would be delivered in Abonmai’s case and added that the case is under investigation by the National Investigation Agency (NIA) but details cannot be divulged at the moment.
The Chief Minister also said that he strongly condemns the incident and would not tolerate such mindless violence.
Regarding construction of a memorial park in Abonmai’s name, Biren said the Government would do the needful though it might take some time.
Identifying late Abonmai as a vocal leader who believed in the unity of Manipur and welfare of the Zeliangrong people, the Chief Minister said Abonmai was like family to him.
N Biren Singh said he shares the grief and sorrow of the family, the people and also expressed gratitude to the JAC for looking after and supporting the bereaved family during their time of sorrow.
Quoting Prime Minister  Narendra Modi, the Chief Minister said “This is not the time for war,” and further called on everyone to shun violence.
“Violence and infighting amongst us have never brought development in our society”, the Chief Minister said, reminding the people of past infighting among different communities.
“Let us respect each other and co-exist as one”, he said.
Hill Areas Committee Chairman Dinganglung Gangmei said taking the path of violence and hate because of differences in views or opinions will not bring progress to the society or the Nation.
In a matured democracy like India where the concept of unity in diversity exists, there is no place for politics of hate and violence, he said.
“Let us co-exist with communal harmony without disturbing the identity of other communities”, he said.
The HAC Chairman condemned every form of violence and added that no one has the right to take the law into their own hands.
The observance was attended by CAF&PD Minister L Susindro Meitei and leaders of various civil society organizations, among others.
As part of the observation, the Chief Minister also led the others in offering floral tribute to (L) Athuan Abonmai. Family members also made small speeches of gratitude and presented a special song.