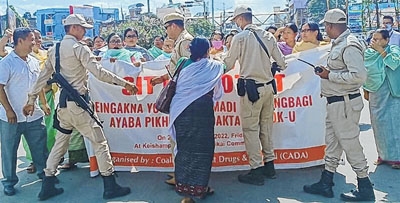 By Our Staff Reporter
IMPHAL, Sep 23 : Starting a movement against lifting of prohibition partially from the State, Coalition Against Drugs & Alcohol (CADA) and mothers representing different meira paibi lups staged a sit-in protest at Keishampat Leimajam Leikai demanding immediate revocation of the Cabinet decision, today.
After the sit-in at Keishampat, volunteers of CADA and several women tried to carry out a protest rally upto Raj Bhavan but the endeavour was cut short as the police foiled it after a brief standoff.
It is reported that one elderly woman fell unconscious during the stand off.
The protesters tried to march towards Raj Bhavan from Keishampat Leimajam Leikai but a good strength of police prevented them from advancing further near the office of the Electricity Department after an intense struggle between the two sides.
During the tussle, one elderly woman activist fell unconscious presumably due to the tense atmosphere coupled with heat exhaustion.
Speaking to the media by the sideline, Geetchandra Mangang said that CADA and many people still oppose the move of the Government to regulate brewing of liquor.
It is very unfortunate that the State Government is not paying any heed to the reaction shown by CADA and meira paibi lups on lifting prohibition, he added.
The rally was taken out to air the grievances of the people, he said and added that the decision of the State Government was inimical to society and the people must not accept it.
Earlier at the protest demonstration, the CADA secretary general said that they will continue to register protests with like minded groups at different parts of the State against the Cabinet decision taken on September 20 last.
"If the Government indeed wants to legalize liquor then they  must give a room for the people to analyse it but the decision taken on such a crucial matter was very hasty," he said.
Asking if the Government is going to legalise everything which they couldn't control including drug, corruption and prostitution, he maintained that CADA will never accept the 'hasty' resolution taken to allow sale and consumption of liqour without consulting the stakeholders.
"The initiative taken up by the State Government is confusing the people as they are carrying out the War on Drug campaign on one side and is legalising liquor at the same time," he said and  urged the State Government to revoke the decision at the earliest.
Geetchandra further stated that the War on Drug campaign will not yield any result if the Government goes ahead with revoking prohibition.
Selling liquor openly will also be detrimental to public health, he opined and asked if there are no other sources to earn revenue.
"If there indeed are no other sources than the Government must make it public and consult with the experts to earn revenue  for the State," Geetchandra said.
He then warned that CADA and other organisations will do away with democratic protests and stage more aggressive agitation if the need arises.